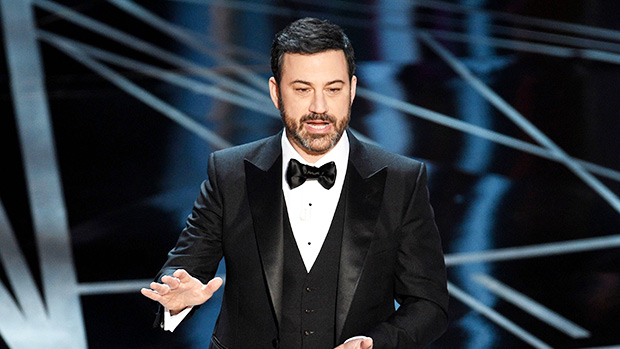 Jimmy Kimmel is set to host the 95th Academy Awards on March 12, 2023. This will be the third time that the famous comedian and late-night talk show host hosts the Oscars. He previously took on the role as host in 2017 and 2018. Jimmy was announced as host for the 2023 Academy Awards on November 7, 2022, four months before the star-studded show is set to air on ABC.

The Academy Awards resumed hiring hosts for the show last year with Amy Schumer, Wanda Sykes, and Regina Hall, after three straight years of no hosts. The 2019 Academy Awards made history as going host-free for the first time since 1989. It wasn’t originally planned that way. Kevin Hart was previously enlisted for the gig, but before long, Twitter users began resurfacing years-old homophobic tweets. Kevin then stepped down from the role amidst the backlash against him and no one stepped in to take the gig. The show went on without a host to shepherd the exhausting three to four hour telecast along for the next two years, until hosts returned for the 2022 Academy Awards where Will Smith infamously slapped Chris Rock.

The 2023 Academy Awards will celebrate the best in film that was released this year, as Jimmy entertains the crowd and everyone else watching at home with his monologue and expected skits. Here’s a list of stars who took on Oscar hosting duties over the years to varying degrees of success.

ABC was pleased with the network’s late night talk show host’s performance in 2017, especially how he handled the debacle of La La Land incorrectly being named Best Picture over the actual winner Moonlight. It earned Jimmy Kimmel a second go as host in back to back ceremonies, returning in 2018. Thanks to his home base in Hollywood and his tight knit circle of A-list friends, Jimmy was right at home in front of the starry Oscars audience. It also helped that Jimmy Kimmel Live‘s head writer — and Jimmy’s wife — Molly McNearney took over the telecast’s writing duties to keep the show’s humor current and hip.

For the 2023 Academy Awards, Jimmy will host while his wife Molly will executive produce the show with showrunners Glenn Weiss and Richy Kirshner. “Being invited to host the Oscars for a third time is either a great honor or a trap,” Jimmy said in a statement. “Either way, I am grateful to the Academy for asking me so quickly after everyone good said no.”

They just have to do better than last year’s hosts… 😉

Amy Schumer, Wanda Sykes, and Regina Hall were the co-hosts of the 94th Academy Awards on March 27, 2022. The trio did an amazing job at hosting the show, but things went haywire when Will Smith got on stage and slapped Chris Rock, who made a joke about Will’s wife Jada Pinkett Smith‘s bald head. Still, Amy, Wanda, and Regina were praised for their performance at the 2022 Oscars.

Chris Rock had the unenviable task of hosting in 2016, the year that there were zero nominations for actors of color, at the 88th Academy Awards. As a result, the Black comedian had to address the #OscarsSoWhite elephant in the room. He ripped into the topic in his monologue,  jokingly referring to the ceremony as the “White People’s Choice Awards.” He added that in years past there hadn’t been an uproar over the lack of diversity because “we had real things to protest; we’re too busy being raped and lynched to care about who won best cinematographer.” He also added, “This year, in the In Memoriam package, it’s just going to be black people that were shot by the cops on their way to the movies.”

Neil Patrick Harris was already a veteran of hosting several Tony Awards telecasts, and brought his song and dance skills to the Oscars. Actress Anna Kendrick joined him onstage for a lively musical opening number, and he seemed to enjoy hosting the show. That was, until he read Twitter afterwards. NPH later appeared on Jimmy Kimmel Live and said he’d never host the show again after looking at Twitter and finding “Uniform hatred,” of his hosting duties. He went on to tell the Huffington Post, “I don’t know that my family nor my soul could take it. It’s a beast. It was fun to check off the list, but for the amount of time spent and the understandable opinionated response, I don’t know that it’s a delightful balance to do every year or even again.”

Back when daytime talk show host Ellen DeGeneres was still known as the “Queen of Nice,” the upbeat comedian was asked back in 2014 after hosting the show in 2007. Rather than poke fun at the Oscars or bring any controversial jokes, she mixed and mingled with her A-list front row audience. Ellen infamously gathered Meryl Streep, Julia Roberts, Jennifer Lawrence, Brad Pitt, Angelina Jolie, Bradley Cooper, Lupita Nyong’o and more together for a massive celebrity selfie. She later had boxes of pizzas brought in which she served up to the same hungry movies stars, with Brad Pitt even helping pass out paper napkins and plates.

Add Family Guy creator Seth McFarlane to the list of hosts who never want the job again. He did a disastrous and misogynistic song and dance number called “We Saw Your Boobs,” where Seth named off actresses and the movies where they appeared topless. Seth also made a joke about Kim Kardashian’s “dark facial hair.” He later told Entertainment Weekly, “It’s a format that’s about as current as the 1950s variety show format. There’s always an effort to make it interesting and exciting to viewers who are used to a very different entertainment landscape in the modern era, and it’s often times fitting a square peg in a round hole. So it’s not an easy job, and I’m not surprised that they have a tough time finding takers.”

Billy Crystal: 2012 plus eight other times as host

After the total disaster that was Anne Hathaway and James Franco’s Oscars co-hosting duties in 2011, the Academy brought back “safe” stalwart Billy Crystal, after their first choice Eddie Murphy withdrew from the gig. He reigned as the host of the show seven times between 1990 and 2000, and was a familiar and beloved presence for the audience and viewers. But Billy played it too safe to the point of being boring. Washington Post critic Hank Stuever wrote that Billy “seemed to be overseeing a cruise ship dinner show designed to appeal to the over-50 travel club,” adding that, “Early on, it hit the rocks and started to list. Almost everyone drowned.”

Anne Hathaway unfortunately had a super rough go at it when she co-hosted the show with James Franco in 2011. The two were ill-matched thanks to Franco’s utter lack of enthusiasm, which Hathaway then tried to overcompensate for with a ton of energy. And the worst part is the Ocean’s 8 star didn’t even want to host to begin with! “Can I dish some tea?” Hathaway told People, in an interview published Feb. 10, 2019. “I turned that gig down, and James is the one that convinced me to do it.” She then added that she would have likely been fine if Franco admitted it was all a joke. “If he’d turned around and said ‘I’m pranking you right now.’ I think I would have been okay with it. I would’ve been like, ‘That sucks, but it’s epic,” she said. “When all the dust settled, I was just like, you gotta be kidding me. Your first instinct is usually the right one, and all the reasons why I turned it down came true,”