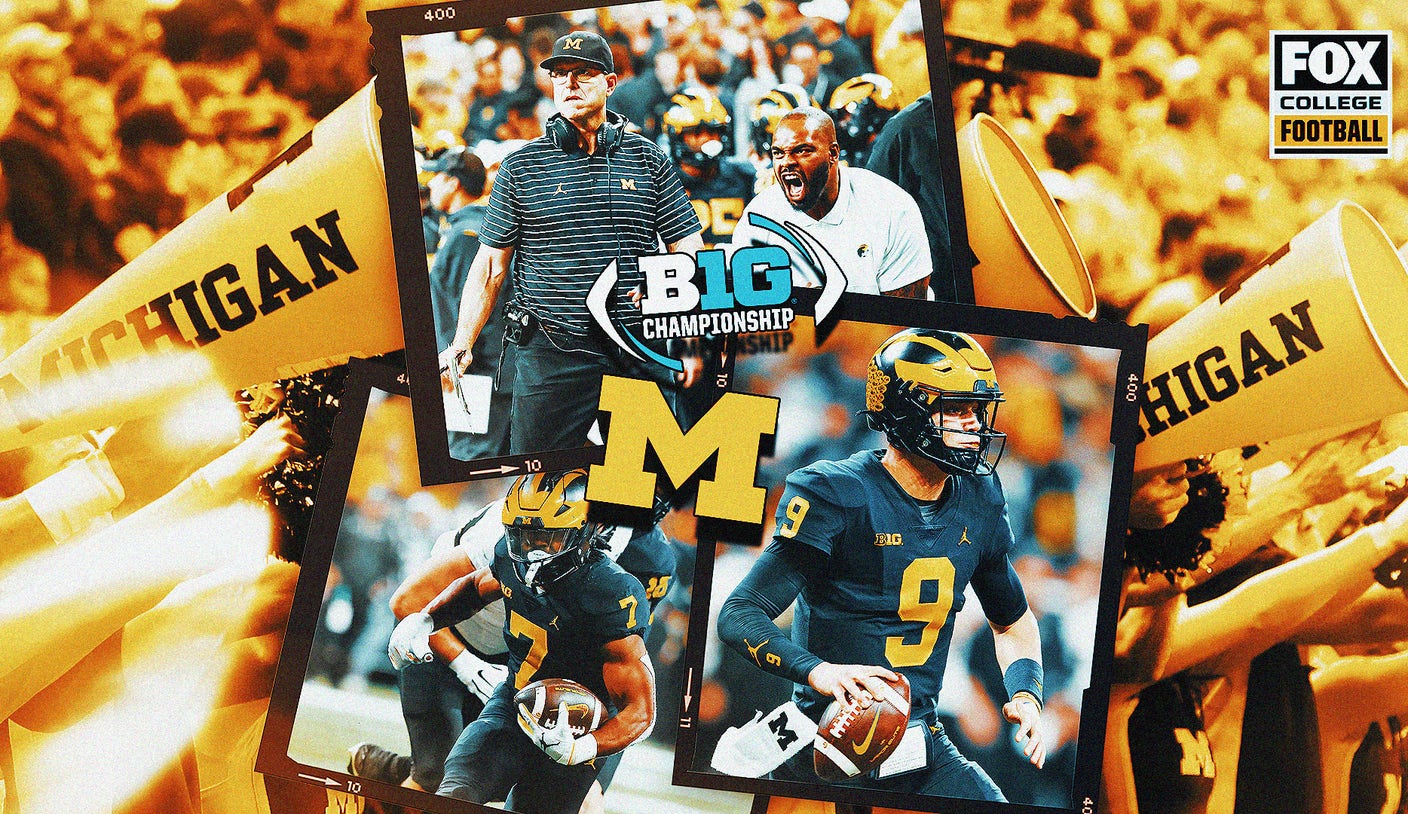 There was a rawness to Michigan’s exaltations when the clock reached zero in last year’s Big Ten title game, a 42-3 demolition of Iowa that was over by halftime. The reactions from long-tenured veterans like Aidan Hutchinson and Cade McNamara — players who lived through the disastrous pandemic-shortened campaign that forced coach Jim Harbaugh to overhaul his program — felt equal parts cathartic and visceral as the Wolverines reached the College Football Playoff for the first time in school history. Nobody expected much from the 2021 Wolverines, and there they were rejoicing in their first Big Ten title since 2004.

But if that team’s run to glory was unexpected, there was something about this year’s group that felt preordained. Michigan began the season ranked in the top 10 despite losing its three best defensive players and one of the most productive running backs in school history. Players and coaches spoke openly about surpassing everything last year’s team accomplished. And once Harbaugh’s team obliterated all three nonconference opponents, most people assumed the Wolverines would run the table to set up an undefeated clash with Ohio State. And then, for the second year running, they bullied the Buckeyes, too.

So when the final seconds of Saturday’s game expired and a 43-22 win over Purdue was complete, the players in maize and blue walked slowly across the turf to shake hands with their opponents. Gone were the gleeful leaps and whoops that defined their celebration of snapping a 17-year championship drought last season. In their place was the level-headed calm of a team that believes it’s capable of more.

The Wolverines are heading back to the national semifinals with a belief they can win it all.

“I love our chances,” Michigan quarterback J.J. McCarthy said. “Last year it was kind of the bright lights, everything was new, Big Ten Championship, College Football Playoff. Going into the offseason it gave us so much momentum, and we knew that we could get there, and we could get back. Ultimately, this whole offseason is was about winning it. So at the end of the day everything is great that happened today, but the job is not finished. We’ve got a lot bigger plans in mind.”

Purdue vs No. 2 Michigan Highlights

The Wolverines defeated the Boilermakers, 43-22, in the Big Ten Championship at Lucas Oil Stadium in Indianapolis.

Here are some thoughts from Lucas Oil Stadium:

Saturday’s game marked the first time Harbaugh and co-offensive coordinators Sherrone Moore and Matt Weiss were tasked with designing a game plan in which tailback Blake Corum would play no part. The coaching staff likely knew Corum’s involvement would be tempered during the regular season finale against Ohio State, but he still took the field with Michigan’s starting lineup and there was still a chance his knee might have held up better than expected. The result was another run-heavy approach that featured 10 more rushing plays than passes.

But with Corum reportedly out for the season after undergoing surgery — he was not in Indianapolis and posted on social media wishing his teammates good luck — the strategy employed by Michigan’s offensive brain trust appeared predicated on using the passing game to set up the run for perhaps the first time all season, if not longer. McCarthy completed passes of 9, 16 and 25 yards on his team’s opening possession, with the latter producing a beautiful touchdown to tight end Colston Loveland between two defenders.

The Wolverines celebrated after beating Purdue 43-22 on Saturday to defend their Big Ten crown.

Many of McCarthy’s best throws originated outside the pocket on both designed rollouts and improvised scrambles, showcasing the athleticism fans have drooled over since his commitment to Michigan as a five-star recruit. The 16-yarder to wideout Ronnie Bell came after McCarthy spun away from pressure and held the ball until he was within a whisper of crossing the line of scrimmage, only to zip a dart downfield. He baited a Purdue rusher into the backfield midway through the second quarter before sprinting out of harm’s way to rifle a 7-yard touchdown to tight end Luke Schoonmaker that gave the Wolverines a 14-10 lead.

By halftime, McCarthy had thrown for twice as many passing yards (90) as Michigan gained on the ground (45) against a surprisingly stout Purdue front.

The formula reversed after halftime, when Corum’s backup Donovan Edwards opened the third quarter with an explosive 60-yard run after juking a defensive back at the line of scrimmage to break into open space. A short pass from McCarthy on the next play gave way to three consecutive runs that pounded the ball across the goal line in the arms of linebacker-turned-tailback Kalel Mullings, who scored the first touchdown of his career.

Edwards extended Michigan’s lead to 15 on the next possession when he sidestepped two defenders, broke a would-be tackle from a third and dragged a fourth Purdue player into the end zone for a 27-yard score. He finished with 25 carries for 185 yards and a score.

“[Edwards] has 401 yards in the last two games,” Harbaugh said. “You want to talk about big games? This guy comes alive in the big games.”

Added Edwards: “Like Coach Harbaugh said, I believe, you know, I rise to those occasions. I thrive for that.”

Michigan running back Donovan Edwards scored from 27 yards out in what ended up being a 185-yard night.

Aside from McCarthy, who signed with Michigan as the No. 25 overall prospect in the 2021 recruiting cycle, few incoming freshmen have captured the imaginations of fans like five-star cornerback Will Johnson — the son of former Wolverine defensive back Deon Johnson. The in-state product from Grosse Pointe, Michigan, a suburb of Detroit, was rated the No. 3 player in the class of 2022 and became the jewel of Harbaugh’s latest recruiting haul.

Johnson arrived in Ann Arbor with the physical tools and mental makeup of an immediate contributor for first-year defensive coordinator Jesse Minter, but veteran cornerbacks DJ Turner and Gemon Green occupied the starting roles coming out of fall camp. Co-defensive coordinator Steve Clinkscale, who oversees the secondary, rotated Johnson into the lineup as the team’s No. 3 corner with an unspoken understanding that snaps would gradually increase.

“He is a freshman that came in that he didn’t play like a freshman,” McCarthy said of facing Johnson in practice. “And he just had so much God-given ability that was backed up with his tremendous work ethic and his skills. I mean, his skills are top of the charts. I just can’t wait to see him keep growing, keep grooming into the great player that he is going to become.”

By November, Johnson began usurping playing time from Green. By the time Michigan traveled to Ohio Stadium for the regular-season finale, Johnson earned the first start of his career against the Buckeyes. Harbaugh praised his freshman for defending star wideout Marvin Harrison Jr. so well that Ohio State began moving its No. 1 option to the other side of the field.

The preceding weeks laid the foundation for Johnson’s coming-out party on the biggest stage of the season at Lucas Oil Stadium. He intercepted two passes in the second half of Michigan’s win over Purdue to double his season tally and extinguish any hopes the Boilermakers had of a comeback that would have propelled them to the Rose Bowl.

Johnson’s first interception was a brilliantly savvy move in one-on-one coverage against Jones, who tormented the Wolverines for much of the evening. He maintained outside leverage as Jones reached the top of his route and then jumped the pass when Purdue quarterback Aidan O’Connell threw the ball to the inside. He picked O’Connell again three possessions later on what seemed like a miscommunication between quarterback and receiver to facilitate an eventual 17-yard touchdown pass from McCarthy to Bell.

The Wolverines entered championship weekend ranked second in the penultimate CFP rankings and enjoyed the added benefit of playing in the prime-time television slot Saturday evening. By the time Michigan kicked off against Purdue — at approximately 8:20 p.m. ET — Harbaugh and his players knew they were all but assured of keeping the No. 2 ranking when the final standings are announced Sunday afternoon.

Solidification began Friday evening when No. 4 USC was blown out by Utah, 47-24, in the Pac-12 title game to drop the Trojans from the top four and eliminate them from consideration for the national semifinals. Then, third-ranked TCU suffered its first loss of the season in overtime to Kansas State in the Big 12 Championship on Saturday afternoon to leave Michigan and Georgia as the only undefeated teams in college football. And when Georgia smashed LSU on Saturday evening, just a few hours before the Wolverines took the field at Lucas Oil Stadium, any chance of Harbaugh’s team leapfrogging the defending national champions evaporated.

All of that meant Michigan had little to play for against the Boilermakers aside from chasing a second consecutive Big Ten title for the first time since 2003-04 under Lloyd Carr, the last man to lead the Wolverines to a national title. Michigan was locked into the No. 2 seed courtesy of the aforementioned results and last week’s thumping of Ohio State, which is expected to replace USC as this year’s fourth entrant in the CFP.

Aside from dispatching Purdue, the top priority for the Wolverines became avoiding serious injuries in a game light on postseason implications. And there were several scares: Loveland, who caught his second touchdown in as many games, dropped out with an apparent leg injury in the first quarter before returning later in the half; inside linebacker Junior Colson also missed a portion of the opening half with an undisclosed injury and re-entered the lineup at the start of the third quarter; edge rusher Eyabi Okie, whose playing time expanded with Mike Morris unavailable, was hurt chasing O’Connell late in the second quarter and didn’t return until the fourth.

The most concerning injury involved cornerback Turner, the team’s best perimeter defender. Turner appeared to hurt his knee while defending a deep pass down the sideline. He bypassed the medical tent and walked directly to the locker room under his own power — albeit with a noticeable limp — following an on-field examination. But he, too, returned.

No. 2 Michigan defeats Purdue in the Big Ten Championship

RJ Young reacts to the Wolverines defeating the Boilermakers for the Big Ten title.