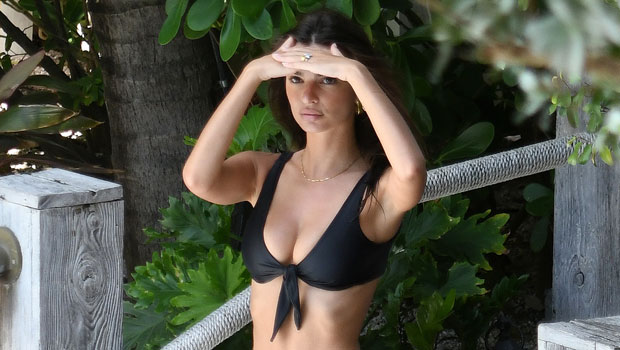 Emily Ratajkowski had a quick stop over at the gorgeous island of Ibiza recently. The supermodel/actress took to her Instagram on Friday, Oct. 28 to share an incredible photo album (below) of her “36 hours in Ibiza,” which was her caption for the fun snaps. In one of the pics, Emily commanded attention in a red bikini, as she posed for her life on the stunning beach.

A few of the other photographs include her adorable 1-year-old son Sylvester Apollo Bear, whom she shares with her ex-husband Sebastian Bear-McClard. The star filed for divorce from the movie producer in September, four months after the couple had split. They had married in a surprise ceremony in February 2018

Just last week, Emily opened up about how she is dealing with the demise of her marriage in an interview with Harper’s Bazaar. “I can tell you that I have never been single before,” she began. “I feel all the emotions. I feel anger, sadness. I feel excitement. I feel joy. I feel levity. Every day is different. The only good thing I know is that I’m feeling all those things, which is nice because it makes me believe that I’ll be okay.”

She went on to confirm she is currently on the dating scene, amidst romance speculation with Brad Pitt. “I have gone on dates,” the Gone Girl star admitted, before revealing that she’s not on any dating apps yet. “But give me time,” Emily added with a laugh.

Emily also dished on how she has a better view of herself and what she wants in a date now. “I wasn’t very good at deciding what I liked, I really wanted to be chosen,” she explained. “It was hard for me to go on a date with someone and think about how much I did or didn’t like them. I would have been thinking about how they were perceiving me, what it meant, what they wanted from me, what it meant about my self-worth. I don’t have that anymore. So now it’s really fun to go to dinner with someone and be like, ‘Cool. I really enjoyed these parts of them. I really didn’t like these other parts.’”