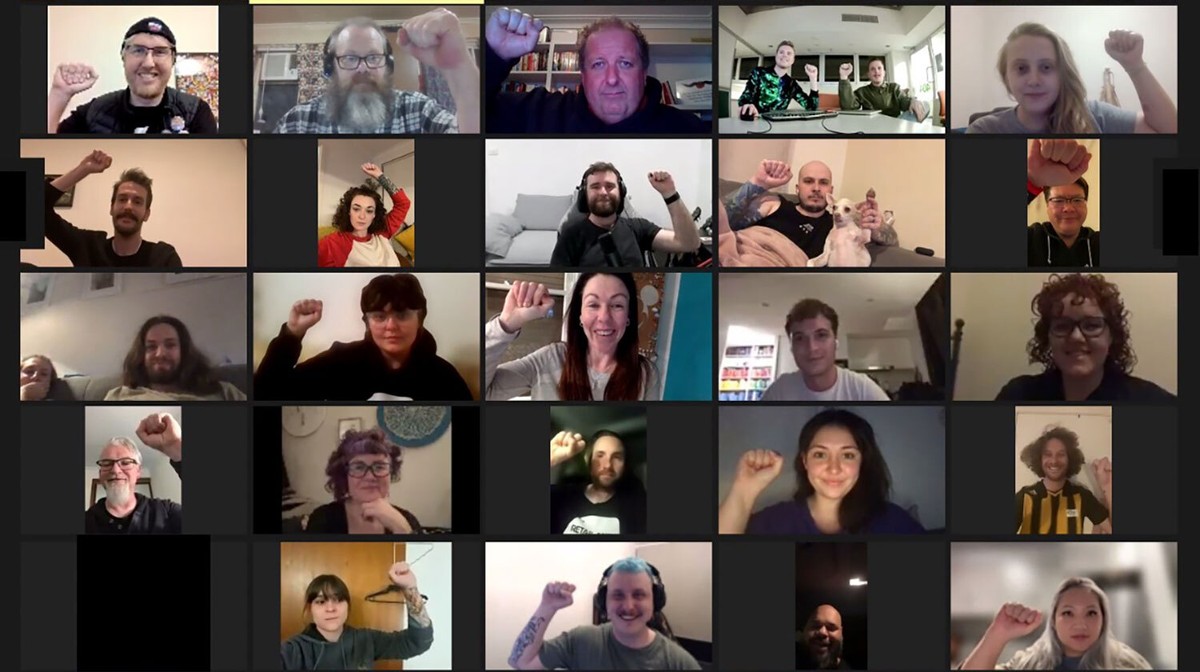 A group of Apple retail workers has coordinated the first nationwide strike in Australian history, their union told VICE World News, as workers turn the screw on the world’s most valuable company for a better pay deal.

On Tuesday, more than 100 unionised Apple retail workers walked off the job for an hour in stores across Australia in protest of a new pay deal that has seen Apple refuse to offer its retail workforce minimum standards like weekends and set rosters, after months-long negotiations slowed to a standstill.

Apple’s retail workforce in Australia joins a wave of others around the world in organising for better pay deals, as a global cost of living crisis begins to simmer to a boil.

Just a few days ago, workers at an Apple store in Oklahoma City voted for it to become the second store in the U.S. to unionise, after Apple’s retail employees in Maryland, Baltimore, unionised to have more say on wages and COVID-19 policies in April. Meanwhile, in Glasgow, Scotland, workers at an Apple store are poised to vote on whether to unionise early next month.

Josh Cullinan, secretary of Australia’s Retail and Fast Food Workers Union, told VICE World News the organised action seen from workers in the U.S., along with the arrival of a crippling cost of living crisis, has charged much of the action now happening in Australia.

Workers at Apple in Australia feel particularly inspired, he said, because they face many of the same union-busting tactics faced by workers in the U.S.

“Apple has refused to bargain in good faith, hardly budging from a wage-cutting substandard deal which pays less than the [minimum wage], without set rosters, and without any work-life balance,” Cullinan said.

In Australia, Apple’s retail workers have been pushing back against the company for months, after they accused its leadership in August of trying to rush through a “subpar” new pay deal in “bad faith” for its 4,000 retail staffers, who have been paid on an old “zombie” pay deal that expired in 2018.

In early September, unionised retail workers at Apple in Australia voted to strike in protest of poor pay by refusing to sell certain products or to work at all. After that, Apple eventually came to the table with an improved pay deal that included new pay minimums 17 percent above the industry minimum wage, and offered “improvements to scheduling.”

For those working full time, that means they will get two consecutive days off each week, but no set days off. Part-timers, meanwhile, will get guaranteed minimum hours under the new deal, but no weekends or set days off.

The latest pay deal would guarantee Apple’s retail staffers earning minimum wage an annual wage increase of 2.6 percent and 2.8 percent over the next four years. However, because most of Apple’s retail workers earn above minimum wage, unions argue, more than 70 percent of the company’s staffers wouldn’t receive the benefits.

Cullinan said he hopes this week’s round of strike action will force the company back to the table to deliver an even better pay deal, which he suggested they can no doubt afford.

“Apple has admitted it hasn’t even costed their annual wage increases—2.8 percent and 2.6 percent starting late in 2023. Money doesn’t matter to them, profit is their God.”

A spokesperson for Apple refused to answer questions from VICE World News about the state of negotiations, but insisted that the company’s workers are among the best-paid in Australia. He said Apple has made “many significant enhancements” to the company’s “industry-leading benefits.”

“We are committed to providing an excellent experience for our customers and teams, and proud to reward our valued team members in Australia with strong compensation and exceptional benefits.”

“I think that people realise that things weren’t happening in a normal fashion when the first bargaining meeting happened without us knowing. That was the inflection point for me.”

Along with Tuesday’s strike action, unionised Apple workers in Australia will also begin to refuse to sell certain products or refer customers to Apple’s financing services from Wednesday, in an attempt to force the company’s hand on a better deal. Some of that action, which also includes refusing to offer technical support to customers, might seem more harmless, but has the potential to threaten a considerable chunk of Apple’s day-to-day Australian retail business.

According to the union, Apple has threatened workers who plan to strike with “unilateral wage cuts.” On Monday evening, the company announced that it will take its latest pay offer, which unions say is still “substandard,” to a vote with the company’s 4,000 workers in Australia. In response, unionised workers told VICE World News they will strike again on Oct. 22 for a full 24 hours, as they launch a fierce “vote no” campaign.

One Apple retail staffer, who spoke to VICE World News on the condition of anonymity for fear of retribution, said workers were left with no choice but to take action, after the company opened talks over the new enterprise bargaining agreement—a collective pay deal for all Apple staff in Australia—with a small subset of non-unionised workers, without notifying all workers of their chance to negotiate with management.

“I think that people realise that things weren’t happening in a normal fashion when the first bargaining meeting happened without us knowing,” they said. “That was the inflection point for me.”

The old deal has seen Apple’s Australian retail workers for years treated like casual workers without any of the benefits—like weekend penalty rates and loading pay—that come with it. Instead, workers are expected to have “wide availability,” Cullinan says, and are forced to succumb to an ever-changing roster while effectively earning “less than minimum wage.”

The new deal tabled by Apple in August wasn’t much of an improvement, unions say. It would have seen workers take a real wage cut, and allowed store management to roster workers up to 60 hours in a single week, without overtime.

Read more from VICE Australia and subscribe to our weekly newsletter, This Week Online.