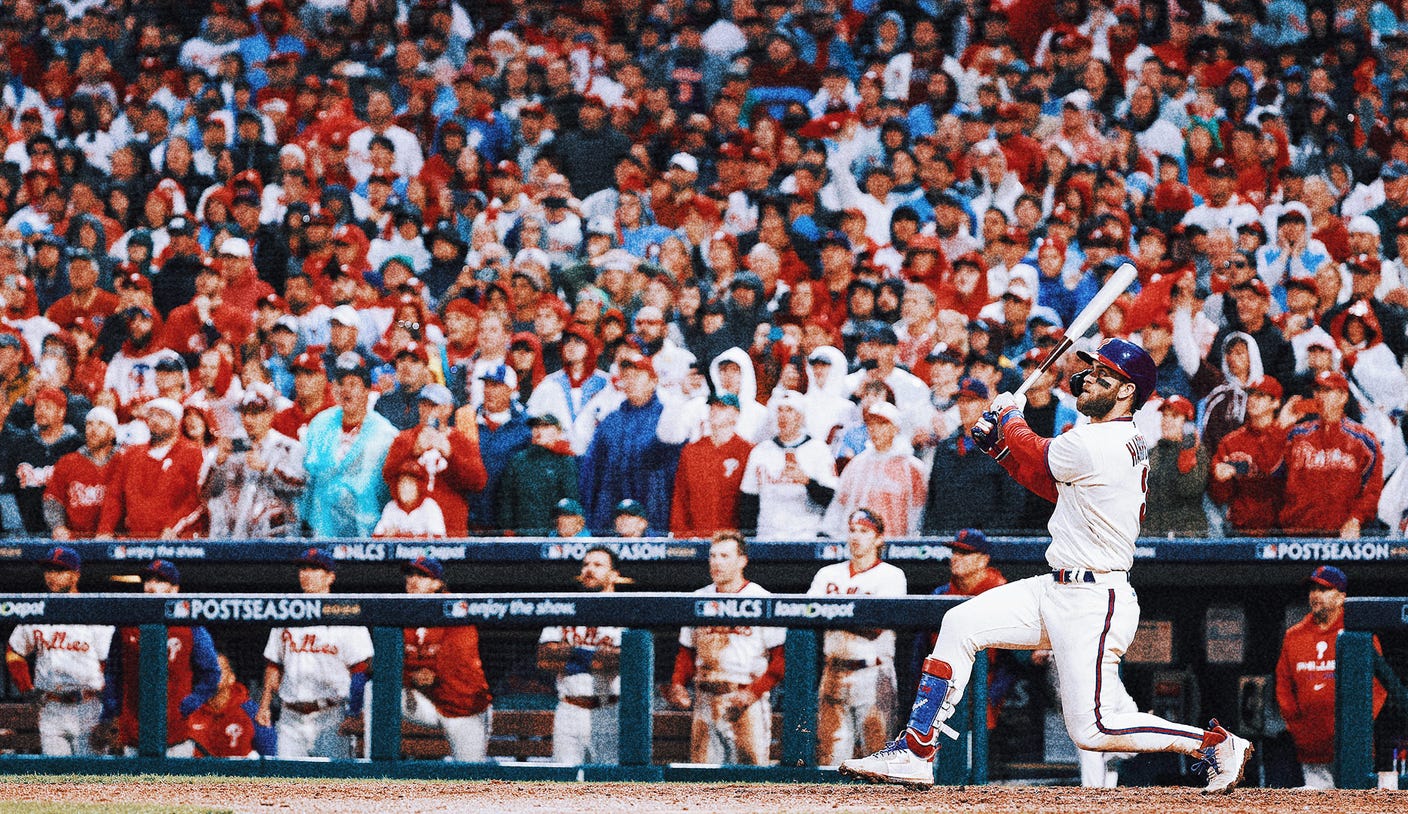 PHILADELPHIA — This is everything Bryce Harper was supposed to be.

He first entered our collective consciousness as a smooth-faced 16-year-old on the cover of Sports Illustrated. His face smeared in eye-black, Harper was dubbed the Chosen One, a generational baseball talent with the potential to make the game his own. Those are lofty expectations for a high school sophomore.

Much has happened in the years since. Harper has gone from child to adult, boy to man, prospect to present. He has enthralled two cities and the world with his exploits, his theatrics and his remarkable abilities. His trademark high-energy swing — so violent yet, somehow, so dialed — has blasted 285 regular-season home runs over the past 11 years. A generation of baseball fans has followed Harper’s every step while frequently serenading him with chants of “OV-ER-RA-TED.”

Through it all, Harper has advanced, unfazed, with the confidence of a man who knows he was put on this earth to strike a baseball.

The Philadelphia Phillies advanced to the World Series for the first time since 2009 with their NLCS win over the San Diego Padres in Game 5.

On Sunday, on a cold, wet afternoon in Philadelphia, Harper fulfilled his baseball destiny.

With J.T. Realmuto on first and the Phillies down a run late in NLCS Game 5, Harper dispatched a Robert Suárez fastball over the wall in left, giving his team the lead and the series. And giving his city the highlight of a lifetime.

As the ball landed in the third row and chaos reigned in South Philadelphia, Harper’s teammates poured out of the dugout, going absolutely berserk, losing their minds and their wits and all sense of reality. But not Harper.

The NLCS MVP-to-be coolly turned toward his brethren, pointed to the bubble-script “Phillies” across his chest and started his trot around the bases. Like he had so many times before. The 45,000-plus roaring Philadelphians and the adult ballplayers hopping around like children indicated that this particular home run was significant. But Harper’s gait told no such tales.

At no point during his journey around the bags did Harper smile, yell or roar. Between first and second, he pointed toward the bullpen, like he does after every home run. In fact, if you watched only Harper, this homer was indistinguishable from all the others.

Most people dream of moments such as this. Bryce Harper expected it.

The Philadelphia Phillies took a 4-3 lead over the San Diego Padres after Bryce Harper launched a two-run home run to left.

Before Harper’s signature moment, the crowd at Citizen’s Bank Park was understandably tense. While yet another postseason homer from Rhys Hoskins gave the home team an early 2-0 lead, the Padres battled back behind a Juan Soto solo shot and then a two-run seventh inning that chased starter Zack Wheeler from the game.

It was exactly how San Diego manager Bob Melvin would’ve drawn it up: a tight lead late, with his two best relievers, Suárez and Josh Hader, available and ready to let the bullets fly. As the rain drenched the turf, leading to lengthy delays to dry the dirt between the later innings, the crowd started to get nervous, doubtful, unsure.

But when Realmuto drew a walk to lead off the eighth, sending Harper to the dish, the sell-out crowd rose to its feet. As stadium speakers blared the key line from Nelly’s “Ride Wit Me” — “AY, MUST BE THE MONEY” — the crowd sang along, understanding that the right guy, their guy, the guy who chose their city, their team, was coming to the plate.

Harper fouled off four high-90s heaters from Suárez, working the count to 2-2 on eight pitches, before he uncorked a laser beam the other way, into the cold early evening and into baseball history.

Bryce Harper talked to Tom Verducci after winning NLCS MVP and reflected on what it means to bring the NL pennant to Philadelphia.

Baseball has always looked outrageously simple to Harper. At 16, he hit a ball 511 feet at Tropicana Field. A year later, he graduated high school early and was the best junior college player in the country. As a 22-year-old for the Nationals in 2015, he crushed 42 home runs and won MVP. His 30th birthday was last week, and he shows no signs of slowing.

Despite an unfortunate hand injury from a fluke hit-by-pitch earlier this season, Harper is still one of the five best hitters in the world. Even as the Trouts, Judges, Machados and Sotos emerge and wow us, too, Harper hasn’t gone anywhere.

And now, he and his team are going to the World Series.

“We got four more games,” Harper reminded the crowd as he accepted his NLCS MVP trophy.

This is a man who fully understands who he is and what he represents. He has spoken at length this postseason about how jacked up he gets for games, how he feels most comfortable when the lights are brightest and the noise is cranked up to a billion.

In those instances, he doesn’t flinch, doesn’t blink. This is the sport he was born to play, the legacy he was tabbed to build.

And he isn’t finished yet.