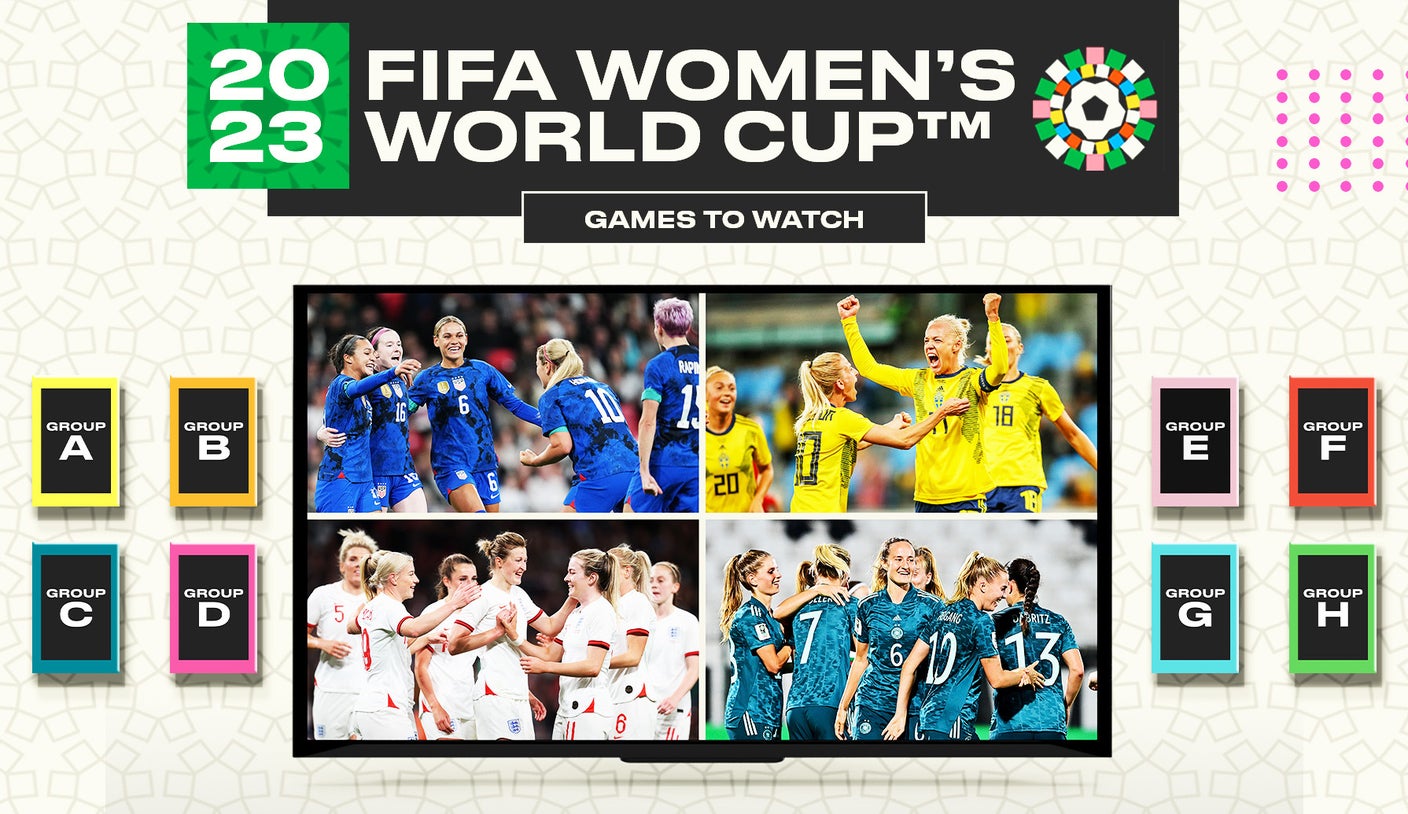 The men’s World Cup is just around the corner, and the women’s event isn’t far behind. It certainly feels closer now, after the draw for the 2023 FIFA Women’s World Cup was held on Saturday in Auckland, New Zealand.

Here are the 10 must-watch group stage matches at Australia/New Zealand 2023, which kicks off next July with a record 32 teams.

The second group game for both nations is rematch of the 2019 Women’s World Cup final in France, which the U.S. won 2-0 on goals by Megan Rapinoe and Rose Lavelle. Much has changed for the two teams in the almost four years since.

The Americans have a revamped roster; Rapinoe, the joint-top scorer and Golden Ball winner at France 2019, won’t be likely to start at age 38. Meantime, the Dutch have been overtaken by rising European counterparts England and Spain, dropping from third to eighth in the FIFA ranking and stumbling at the Euros last summer after winning the continental title in 2017.

The opening match of any World Cup is special. It certainly will be for the co-hosts, who meet former world, Olympic and European champion Norway in the July 20curtain-raiser.

It’s the sixth time the Football Ferns are appearing at the main event; they’ll be hoping that competing on home soil will help them to advance to the knockout stage for the first time. Beating the Norwegians would help.

That’s a realistic goal against a side that’s regressed heavily over the last two decades; even with former Ballon d’Or winner Ada Hegerberg back in the fold, England beat Norway 8-0 at Euro 2022, the largest defeat in program history.

A day after New Zealand play their first match, the other co-host kicks off their World Cup campaign against 2020 Olympic gold medalists Canada.

Led by all-planet striker Sam Kerr, the 11th-ranked Matildasare looking to make their deepest run ever — assuming of courde that they survive the “Group of Death.” Australia reached the quarterfinals at three consecutive World Cups before bowing out in the round of 16 in 2019.

As for Canada, Les Rouges are hoping to finally replicate their Olympic success (the Canadians won bronze in 2012 and ’16) on the game’s biggest stage, where they’ve never advanced beyond the quarterfinals.

Big things are expected from the Lionesses after they won the European title last summer, just the second major tournament title for England, men’s or women’s, and the first in more than half a century.

Sarina Wiegman’s side opens against a to-be-determined opponent (either Chile, Haiti or Senegal) and faces a good Danish team in their second match. But the marquee game is the Group D finale against the 15th-ranked Chinese, who have advanced to the knockout stage in each of the six Women’s World Cups they’ve participated in.

Two of the most technically gifted teams in the competition will meet in this delicious Group B encounter. Spain, which upset the top-ranked U.S. earlier this month, boasts a golden generation of talent led by Alexia Putellas, the world’s consensus-best player and Ballon d’Or winner in 2021 and ’22. La Roja is a contender to win it all despite a disappointing quarterfinal exit at the Euros, where they lost in extra time to eventual champ England.

This game against No. 11 Japan, the 2011 World Cup winner and 2015 runner-up, will tell us plenty about where Spain stands.

Heavyweights in the men’s game, Brazil and France have evolved into elite teams on the women’s side over the last quarter-century despite somehow still having no World Cup or Olympic titles between them.

That could change next summer. The fifth-ranked Les Bleus still have a chip on their shoulder and a point to prove following that narrow quarterfinal loss to the United States in Paris in 2019, a defeat that also prevented them from qualifying for last years’ Tokyo Olympics. Brazil has to like its chances after winning its first Copa América Femenina crown earlier this year. Oh, and both teams play beautiful soccer, too.

The Americans’ title defense begins when they meet the Vietnamese in Auckland on Day 3. Much will be made of the political history between the two countries in the leadup to the match, but the U.S. will be heavy favorites on the field against a country competing at its first World Cup, men’s or women’s.

The last time the U.S. opened a World Cup against an opponent from the Asian Football Confederation, in 2019, they ran out 13-0 winners. That lopsided victory over Thailand sent them on their way to a fourth title. Looking to become the first team, men’s or women’s, to win three straight World Cups, Vlatko Andonovski’s squad will hoping history repeats itself next summer.

With all due respect to Chile, Haiti and Senegal, England won’t get their first true test at Australia/New Zealand 2023 until they meet the Danes in Brisbane on July 22 in their second group stage game.

Eighteenth-ranked Denmark was one of the world’s best teams in the 1990s, and they’re on the way back up now after missing the last three World Cups. And while the Danish will still be significant underdog against the reigning European titlists, they do have a reputation as giant-killers. At the Euros in 2017, Denmark ended Germany’s 22-year run as continental champions. They also went a perfect 8-0 in qualifying matches for this World Cup, scoring 40 goals while conceding just two. They won’t roll over for the Lionesses.

For any country with ambitions to win the World Cup, surviving the first round is Step One. For the U.S., not suffering a letdown in their group stage finale in 2023 will be equally important.

The Americans should beat whoever they end up facing on Matchday 3. But coming on the heels of that marqueecontest against the Netherlands, the U.S. could easily end up in a psychological battle with themselves. That might not matter on the day. But it definitely could when the knockout phase begins. So keep a keen eye on how locked in and sharp Andonovski’s team is in this one. It could tell us plenty about how the USWNT might fare when it matters most.

Making their first appearance at a Women’s World Cup, Morocco will also become the first Arab nation to play in the event when they take on two-time champion Germany in their opening match.

The No. 3-ranked Germans have their sights set on their first global title since winning Olympic gold in 2016. They were eliminated in the quarterfinals of the last World Cup — like France, missing the Tokyo Games because of it — after finishing fourth at Canada 2015.

It could be a long day for the newcomers.

One of the leading soccer journalists in North America, Doug McIntyre has covered United States men’s and women’s national teams at multiple FIFA World Cups. Before joining FOX Sports in 2021, he was a staff writer with ESPN and Yahoo Sports. Follow him on Twitter @ByDougMcIntyre.