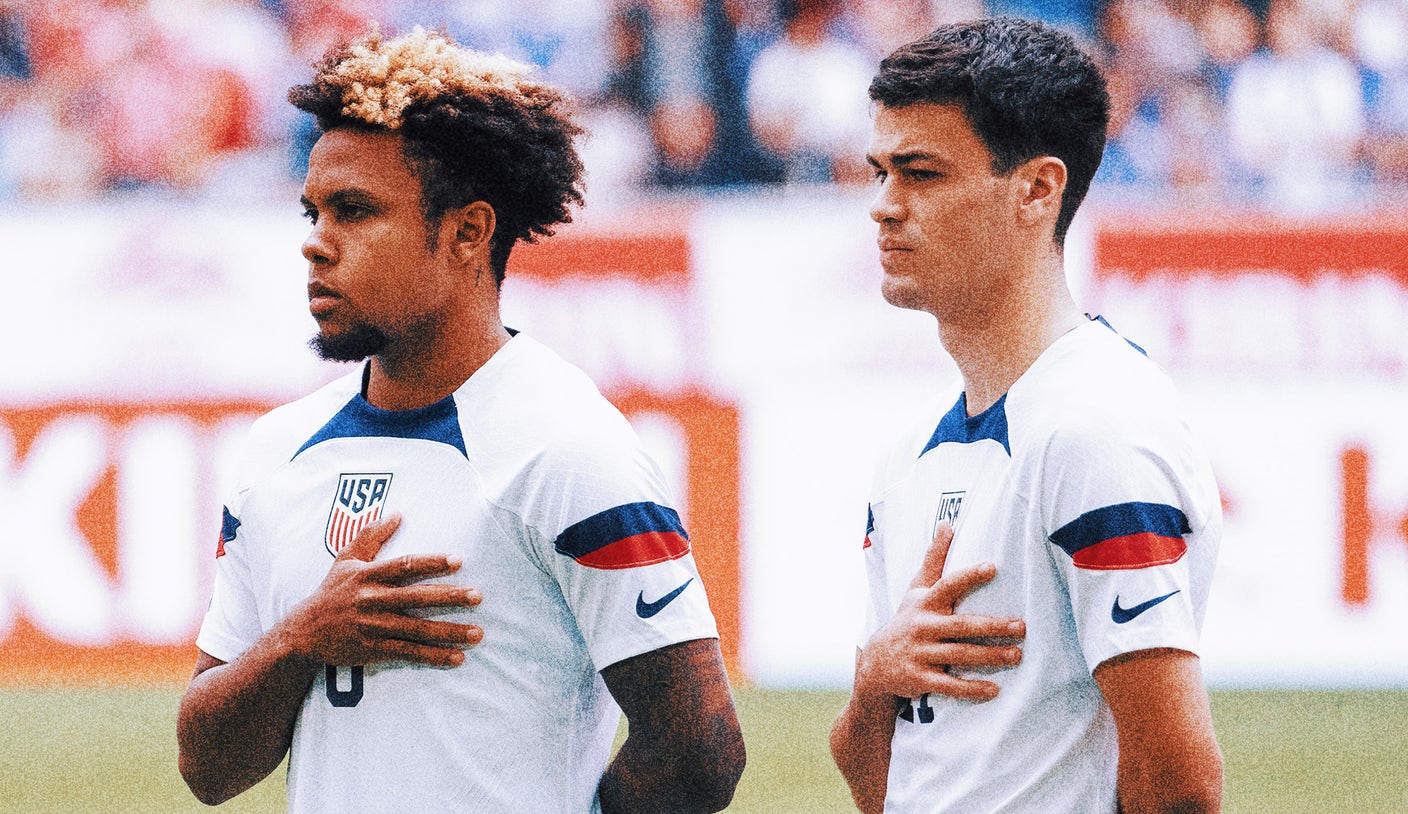 If you want to tell the United States men’s national team to act like they’ve been there before during this World Cup, don’t. Because they haven’t.

As the U.S. prepares for its first match against Wales on Nov. 21, it will do so with a glaring lack of experience playing in a World Cup. The only player on Gregg Berhalter’s 26-man roster with World Cup experience is defender DeAndre Yedlin, who was part of the 2014 squad that went to Brazil and advanced to the Round of 16.

It didn’t have to follow this narrative. At least a handful of young players like Christian Pulisic, Tyler Adams and Weston McKennie would have been called in for the 2018 tournament in Russia. But the USMNT failed to qualify four years ago, so here we are.

Does World Cup inexperience matter in the team’s quest to make it out of Group B and push deeper into the tournament? They’ll face some of the world’s best players early, like Gareth Bale of Wales and England’s Harry Kane. The question extends to Berhalter, too. He played for the U.S. team that reached the quarterfinals at the 2002 World Cup and was also part of the 2006 tournament squad, though he didn’t play in any games. But he has never been the head coach at a World Cup.

U.S. players don’t find any of this to be concerning.

“At the end of the day, we’re going over there to play the sport we’ve played our whole lives,” Pulisic said in May before a friendly against Morocco. “There’s no crazy advice that I think can be the turning point or the thing that will help us win the World Cup. We’re a team. We’ve been learning through these experiences [of not qualifying four years ago to qualifying in 2022] and we’re gonna go there and do the absolute best we can.”

In 2014, the last time the U.S. played in a World Cup, Jurgen Klinsmann’s roster averaged 27.2 years old. Comparatively, Berhalter’s average roster age when the team qualified was 23.8 years old, which was not just the youngest American team to ever qualify but the youngest team to qualify, period.

Now, the team actually going to Qatar averages 25.1 years old — an overall age increase helped by the inclusion of 35-year-old center back Tim Ream and 33-year-old goalkeeper Sean Johnson — but will still be one of the youngest teams in the tournament. Three players are 19 (Gio Reyna, Yunus Musah and Joe Scally), 14 players are 24 or younger and only two are 30 or older.

“You know, people see positives and negatives,” said Jedi Robinson, 25, when asked if the team is tired of hearing about its age. “Some people look at it as inexperience, but this group has been together for a good part of four years. We have a lot of good experience with each other and individually. When I look at this team and see young talent playing so well on so many different levels in so many different leagues, the only thing I see is hunger, determination, intensity and energy. There are all sorts of things we can bring to this World Cup and it doesn’t matter when you step out on that pitch how old you are.

As Robinson implied, when one examines the makeup of this team, it’s probably the most talented group the U.S. has ever put together. What the Americans lack in World Cup experience, they make up for in overall experience. More U.S. teenagers are moving abroad and playing and contributing in top European leagues. They’re playing in big games, starting for some of the best clubs in the world and winning UEFA championships and other league titles. Pulisic, 24, plays for Chelsea, while Adams, 23, and Brenden Aaronson, 22, play for Leeds. McKennie, 24, is at Juventus. The list goes on.

“It’s a hungry group,” said starting center back Walker Zimmerman, who stars for MLS club Nashville SC. “It’s guys who play in big games all the time. We have a lot of players who have played in really big moments, really big matches, and that experience will be invaluable.”

That said, the U.S. was inconsistent during the qualifying process and struggled early. There was the draw with Canada on home soil when American fans booed their team off the field; and there was the loss to Panama on the road. The USMNT finished the 14-game qualifying cycle with a 7-3-4 record and ultimately clinched a World Cup spot.

“One thing we learned from qualifying is that you can talk about it all you want, but until you experience it, it’s hard to really understand it,” Berhalter said in May. “Our job is to put them in position to focus on the performance and not worry about all the external factors, just focus on what we’re doing together as a team.

“What we know is the guys have played in high-pressure situations before. What we know is that we can thrive as underdogs or favorites. We can be comfortable with that. And then we know it’s a tight group and we’re going to have to rely on each other to use our teamwork and use our team culture as an added strength.”

The Americans are hoping that chemistry and brotherhood they’ve created over the last couple of years will work to their advantage. Pulisic, Adams and McKennie grew up together playing for the youth national team when they were 13 to 14 years old. Pulisic, McKennie, Zimmerman, Aaron Long and other guys kept in touch through their headsets playing “Fortnite” and other video games during the pandemic while displaced around the world. They play fantasy football together, golf together, pretty much do anything together.

“As a team, we’ve created bonds and a chemistry that, to be honest with you, is very, very different than a lot of teams I’ve played on,” Adams said

“There’s no cliques,” added defender Reggie Cannon, who didn’t end up making the final roster but is very much part of the USMNT family. “Everyone here is really close. That will be a decider in World Cup games because of how much depth and how much connection you need on your team when you’re facing World Cup competition.

“DeAndre has told me that’s a difference-maker, how closely knit the group is and the team is. Talent on both teams will be there. It will be little, tiny things that will decide games. I think this group has a solid connection and it will show.”

“Going back to my experience in 2002 when we had to face Portugal, I looked around and saw guys like Claudio Reyna and Earnie Stewart and Cobi Jones, guys who had been part of World Cup teams,” said Dave Sarachan, who was a USMNT assistant back then and named the interim head coach in 2017 after the U.S. failed to qualify and Bruce Arena was fired. He has been credited with calling up young players like Adams, McKennie and Zimmerman after the fact in late 2017, and is currently the head coach of the Puerto Rico men’s national team.

“Looking around at all the young guys, that settles you,” Sarachan continued. “It helps in the big picture of what they’re about to face. And I think there’s value in that. To add experience without sacrificing quality would be huge.”

Berhalter’s additions of Ream, who has been solid playing for Fulham in the Premier League, and Johnson, who has been part of the team since Berhalter took over, fit that bill and will be valuable elders.

“Sometimes youth can be blind to pressure,” Sarachan said, noting that Landon Donovan and DaMarcus Beasley were both 20 at the 2002 World Cup. “In some ways, they’re starting fresh and building their own experiences.

“However, I think when the curtain comes up and you’re walking out for a World Cup game, to draw on experience is still a plus. It can work either way. It’s really subjective to the individual. Tyler Adams could care less if he’s played in a World Cup game or not. He can’t be fazed. Weston McKennie will not be fazed. Christian will not be fazed. You could argue not having that experience won’t matter, but we’ll see.”

Regardless of what happens in Qatar, are we witnessing the early stages of a Golden Generation for the U.S.? The right players are coming up at the right time — just in time for the 2026 World Cup, which will be co-hosted by the United States, Canada and Mexico. Looking down the road, these current stars will be four years older and have a legitimate expectation to be a contender.

And while a bell curve of inexperience, experience, game-changers, generational talent and rising stars might be the perfect mashup for a World Cup roster, the U.S. hopes to make a run right now with what it’s got.

“But it all starts now.”

Read more on the World Cup:

Laken Litman covers college football, college basketball and soccer for FOX Sports. She previously wrote for Sports Illustrated, USA Today and The Indianapolis Star. She is the author of “Strong Like a Woman,” published in spring 2022 to mark the 50th anniversary of Title IX. Follow her on Twitter @LakenLitman.