What Time Do the Polls Close? A State-by-State Guide 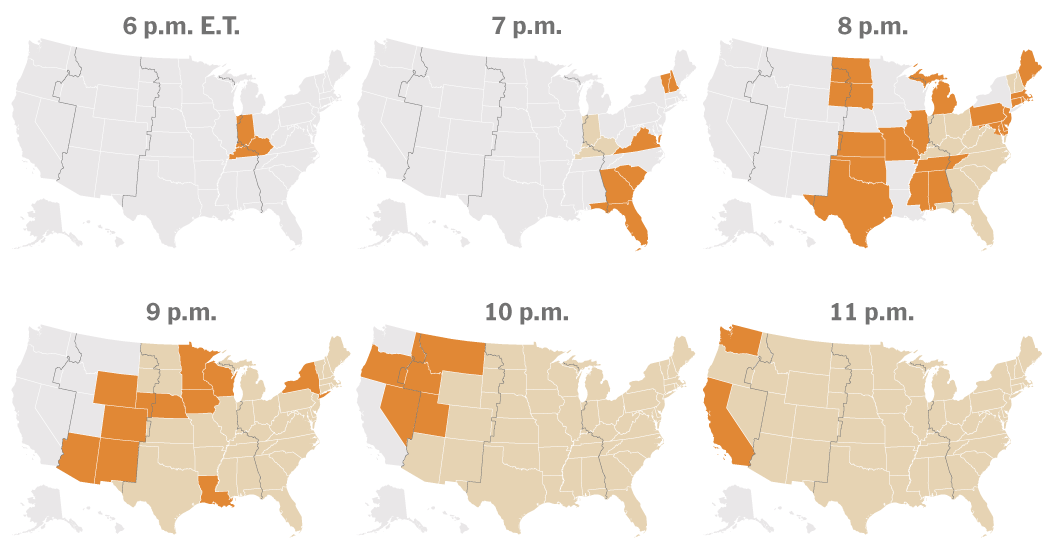 The polls will close over a seven-hour period on Tuesday, starting at 6 p.m. Eastern time in parts of Indiana and Kentucky and ending at 1 a.m. in western Alaska. Here is a guide to when the first polls close in each state, and what races to watch at each point. (In some states, the polls remain open later in some areas than others. You can confirm your local closing times here.)

Note: Poll closing times are shown at the state level only. Not all polls in each state close at the same time, and polls in some areas may close earlier than shown if all registered voters in that polling district have already voted.


How long it takes to get results and call races will vary greatly from place to place, and, as in 2020, it is important to keep in mind that early results may be misleading. Democrats are much more likely than Republicans to vote by mail, which means states that report mail ballots first may appear artificially blue early in the count, while states that report in-person votes first may appear artificially red early in the count.

What to Watch
Kentucky voters will decide whether to approve an anti-abortion constitutional amendment that, if passed, would effectively ensure the implementation of a near-total abortion ban that is currently being challenged in state courts. In Indiana, a House race in the First Congressional District leans Democratic, but, if it were to flip to Republicans, it could be an early sign of a red wave.

What to Watch
In Georgia, the race between Senator Raphael Warnock and his Republican challenger, Herschel Walker, could determine which party controls the Senate — but it will require a Dec. 6 runoff if neither candidate receives a majority. We’re also watching the race between Gov. Brian Kemp and his Democratic challenger, Stacey Abrams.


Florida has closely watched races for Senate and governor, too. And in Virginia, the performances of Democratic incumbents in the Second, Seventh and 10th Districts may offer early indications of whether the party has a chance of maintaining its House majority — or of just how bad its losses may be.

What to Watch
The focus here will be on the open Senate races in North Carolina (between Representative Ted Budd, a Republican, and Cheri Beasley, a Democrat) and Ohio (between Representative Tim Ryan, a Democrat, and J.D. Vance, a Republican). Republicans are favored to win both races, but if Democrats have a better-than-expected day, these are two places we might see evidence of it. We’ll also be watching a handful of competitive House races, including in North Carolina’s 13th District and Ohio’s Ninth District.

What to Watch
Pennsylvania is home to a close Senate race between Lt. Gov. John Fetterman, a Democrat, and Dr. Mehmet Oz, a Republican. Control over the administration of future elections is at stake in the Pennsylvania governor’s race and in Michigan, where voters will choose candidates for governor, secretary of state and attorney general. Michiganders are also voting on whether to enshrine abortion rights in their Constitution.


Kansas’ Democratic governor, Laura Kelly, is in a tight re-election race, as is Gov. Janet Mills of Maine. There are also governors’ races in Oklahoma and Texas where Republicans are heavily favored but Democratic upsets are not out of the question.


There are no competitive races in Arkansas, where Republicans are expected to easily hold the governorship, all four House seats and the one Senate seat up for election. But at this hour, you can expect a steady stream of results to continue coming in from the states whose polls closed half an hour earlier.

What to Watch
Arizona is one of two key states to watch at this point. In addition to an important Senate race, it has races for governor, secretary of state and attorney general featuring Republicans who have questioned the legitimacy of the 2020 election and who, if elected, could transform the administration of future elections. The second key state is Wisconsin: Senator Ron Johnson, a Republican, is up for re-election against Lt. Gov. Mandela Barnes, and there is a close contest for governor.


In Colorado, Senator Michael Bennet is favored to win re-election over a relatively moderate Republican, but he could fall if the day is really bad for Democrats. In Minnesota and New Mexico, Democratic governors have Trump-endorsed opponents. In New York, Gov. Kathy Hochul faces a surprisingly strong Republican challenge, and there are a slew of competitive House races after a court approved a new congressional map.

What to Watch
Nevada is the last big swing state of the day, and virtually everything is up for grabs: The races for Senate, three out of four House seats, governor and secretary of state are all competitive. In particular, the contest between Senator Catherine Cortez Masto and her Republican opponent, Adam Laxalt, is one of three (the others being Georgia and Pennsylvania) that are most likely to determine Senate control — and the secretary of state race could hand control of Nevada’s elections to a Republican, Jim Marchant, who has called for decertifying voting machines and hand-counting all ballots.


There is also an unexpectedly competitive Senate race in Utah between Senator Mike Lee, a Republican, and Evan McMullin, an independent candidate. And Oregon has a neck-and-neck governor’s race between Tina Kotek, a Democrat, and Christine Drazan, a Republican.

What to Watch
Senator Patty Murray of Washington is facing a strong Republican challenge, though she remains favored to win. Aside from that, the main action at this hour will be in the House, with a close race in Washington’s Eighth District and at least half a dozen in California.

What to Watch
Alaska has competitive races for both the Senate and the House, neither of which is a straightforward Democrat-versus-Republican affair. For the Senate, it’s between Senator Lisa Murkowski, a moderate Republican, and Kelly Tshibaka, a right-wing Republican, with a Democrat far behind. For the state’s at-large House seat, it’s between Representative Mary Peltola, a Democrat who won an upset victory in a special election in August, and two Republicans, Sarah Palin and Nick Begich.


Don’t expect quick results in either race. Officials in Alaska won’t finish counting absentee ballots for about two weeks, and after that, if no candidate receives a majority, the state’s ranked-choice voting system will have to play out.