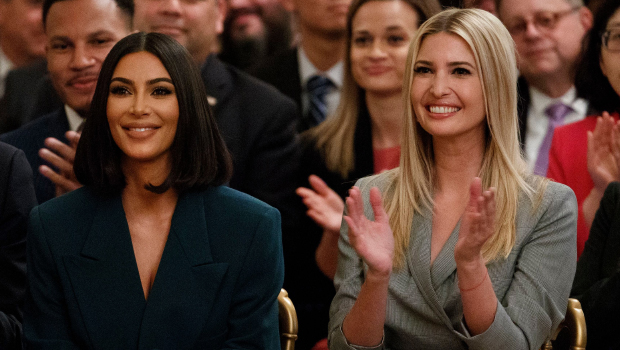 Kim Kardashian and Ivanka Trump were spotted dining for three hours before leaving the Polo Lounge at the Beverly Hills Hotel in Los Angeles Calif. on Sunday, October 23. Unsurprisingly, fans immediately began theorizing what their dinner could have been about. Of course, it was easy for some fans to think their conversations centered around Kanye West‘s recent antisemitic statements, considering Ivanka is Jewish. Some thought the special dinner could be a joint birthday celebration, considering Kim rang in her 42nd birthday On Oct. 21 and Ivanka is turning 41 on Oct. 30. Luckily, HollywoodLife now has the inside scoop and can confirm that the reality star and politician’s meetup was planned for neither situation.

“Kim and Ivanka spoke in great lengths at dinner about the bipartisan work they want to continue doing within programs under the First Step Act. It’s something Kim holds very dear to her heart and something she wants to continue advocating for,” a KarJenner source revealed to HollywoodLife EXCLUSIVELY. The First Step Act was signed into law by former President Donald Trump in Dec. 2018. According to the Federal Bureau of Prisons’ website, the act is a “bi-partisan effort to improve criminal justice outcomes, as well as to reduce the size of the federal prison population while also creating mechanisms to maintain public safety.”

The source continued, “Kim knows that Ivanka plays a pivotal role in fighting for those who she thinks deserves a second chance and Kim believes they can accomplish more if they work together. They’ve been collaborating on this for a few years and are continuing to focus their efforts on helping those in need.”

Kim announced in 2019 that she plans to follow in her father, Robert Kardashian‘s, footsteps and become a lawyer to help reform the criminal justice system, and Ivanka has certainly been a cheerleader for and partner to Kim along the way. In June 2019, the former senior adviser to Trump and Kim sat next to each other when Trump held a meeting surrounding criminal justice reform and second chance hiring (the hiring of those who have previously been incarcerated) and later gushed about the moment on social media. “Thank you @KimKardashian for your passionate advocacy of Criminal Justice Reform and Second Chance hiring!” Ivanka wrote on Twitter and Instagram alongside a photo of her and Kim smiling at the meeting. Kim replied by quoting the tweet and writing, “Thank you @IvankaTrump for helping me to start this amazing journey of fighting for people who truly deserve a second chance!”

In Sept. 2018, before the First Step Act was signed into law, Kim was also at the White House to discuss prison reform and a clemency case with several Trump officials, which included Ivanka and her husband, Jared Kushner. The insider added that while Kim and Ivanka “may have significant differences regarding some of their political opinions, but they both share a passion for criminal justice reform,” hence their collaboration.

A second EXCLUSIVE insider shared a similar sentiment. “Kim and Ivanka have been friends for years, she’s someone Kim respects, even when they’ve been on different sides politically, they’ve never let that affect their friendship,” they explained.

The source also admitted that while Kanye’s harmful rants were brought up during the lengthy get-together, they were not the cause of the meeting. “Their dinner was planned way before Kanye’s latest comments but of course they discussed the situation,” they explained. “Ivanka’s husband is Orthodox, she converted to Judaism when they married, and she’s got strong ties to Israel so naturally Kim got her perspective on everything that’s happening.”

As fans know, Kanye has been dropped from all of his major brand partners, including Adidas and Balenciaga, as well as his former agency, CAA, amidst his concerning statements about the roles of Jewish people in the world. About two weeks ago, the troubled rapper, 45, tweeted that he wanted to go “death con 3” on Jewish people and has proudly doubled down on his stance multiple times since.