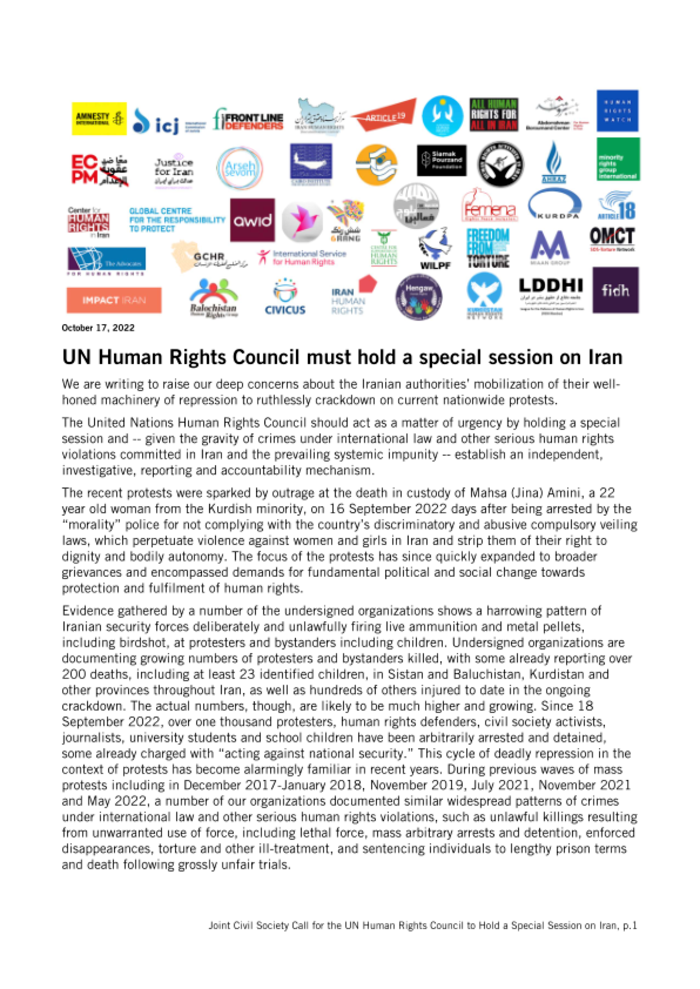 We are writing to raise our deep concerns about the Iranian authorities’ mobilization of their well-honed machinery of repression to ruthlessly crackdown on current nationwide protests.

The United Nations Human Rights Council should act as a matter of urgency by holding a special session and — given the gravity of crimes under international law and other serious human rights violations committed in Iran and the prevailing systemic impunity — establish an independent, investigative, reporting and accountability mechanism.

The recent protests were sparked by outrage at the death in custody of Mahsa (Jina) Amini, a 22 year old woman from the Kurdish minority, on 16 September 2022 days after being arrested by the “morality” police for not complying with the country’s discriminatory and abusive compulsory veiling laws, which perpetuate violence against women and girls in Iran and strip them of their right to dignity and bodily autonomy. The focus of the protests has since quickly expanded to broader grievances and encompassed demands for fundamental political and social change towards protection and fulfilment of human rights.

Evidence gathered by a number of the undersigned organizations shows a harrowing pattern of Iranian security forces deliberately and unlawfully firing live ammunition and metal pellets, including birdshot, at protesters and bystanders including children. Undersigned organizations are documenting growing numbers of protesters and bystanders killed, with some already reporting over 200 deaths, including at least 23 identified children, in Sistan and Baluchistan, Kurdistan and other provinces throughout Iran, as well as hundreds of others injured to date in the ongoing crackdown. The actual numbers, though, are likely to be much higher and growing. Since 18 September 2022, over one thousand protesters, human rights defenders, civil society activists, journalists, university students and school children have been arbitrarily arrested and detained, some already charged with “acting against national security.” This cycle of deadly repression in the context of protests has become alarmingly familiar in recent years. During previous waves of mass protests including in December 2017-January 2018, November 2019, July 2021, November 2021 and May 2022, a number of our organizations documented similar widespread patterns of crimes under international law and other serious human rights violations, such as unlawful killings resulting from unwarranted use of force, including lethal force, mass arbitrary arrests and detention, enforced disappearances, torture and other ill-treatment, and sentencing individuals to lengthy prison terms and death following grossly unfair trials.

Without concerted collective action by the international community that goes beyond statements of condemnation and long-standing calls directed at the Iranian authorities to conduct investigations, countless more men, women and children risk being killed, maimed, tortured, sexually assaulted and thrown behind bars, and evidence of grave crimes risks disappearing. The Iranian authorities have repeatedly ignored the calls of the UN Secretary General, the UN High Commissioner for Human Rights, multiple UN Special Procedures, UN Member States and the UN General Assembly to cease the unlawful use of force, including lethal force, against protesters and bystanders and to effectively investigate and prosecute those responsible for unlawful killings, torture and other ill-treatment. Simply put, all avenues for accountability are closed at the domestic level.

This latest round of bloodshed in the context of protests in Iran is rooted in and fueled by this deep and longstanding pattern of systemic impunity for the most serious crimes under international law which, given the scale and severity of past and ongoing human rights violations, the UN Human Rights Council has not sufficiently addressed.

In this context, we urge the UN Human Rights Council to hold a special session as a matter of urgency. At that session, the Council should establish an independent mechanism with investigative, reporting and accountability functions to address the most serious crimes under international law and other gross human rights violations committed in Iran, including in the context of successive waves of protest crackdowns. The mechanism should conduct investigations into such crimes and violations with a view to pursuing accountability, in particular where violations may amount to the most serious crimes under international law. The mechanism should be mandated and adequately resourced to gather and preserve evidence, and to share it with national, regional and international courts and administrative bodies that may have jurisdiction over crimes. Its public reporting should include analysis of patterns of crimes and violations and the identification of perpetrators.

A mechanism with such functions is urgently needed to complement the mandate of the UN Special Rapporteur on the situation of human rights in Iran, given the gravity and scale of the crimes committed with absolute impunity in the country. The Special Rapporteur has underscored the urgency of “accountability with respect to long-standing emblematic events that have been met with persistent impunity, including the enforced disappearances and summary and arbitrary executions of 1988 and the protests of November 2019.”

In his statement to the UN Third Committee in October 2021 and January 2022 report, the Special Rapporteur has reflected on “the structural impediments for accountability” and the “lack of any progress or political will to conduct investigations, let alone ensure accountability.” The Special Rapporteur has stressed that within Iran’s current “system of governance, it is clear that obtaining accountability for human rights violations becomes arbitrary at best and impossible at worst” and emphasized that “it becomes imperative that the international community uses other existing channels, including in international fora … to seek accountability…. Without the involvement of the international community, such grave violations will continue.”

Many family members of human rights defenders have been threatened while the human rights defenders have been violently arrested and their houses raided. Human rights defenders and victims’ relatives are echoing growing frustration at the international community’s failure to take meaningful action to address successive waves of protest killings in Iran. The father of Milan Haghigi, a 21-year-old man killed by security forces on 21 September, said: “People expect the UN to defend us and the protesters. I, too, can condemn [the Iranian authorities], the whole world can condemn them but to what end this condemnation?” Meaningful action by the international community, in the form of the creation of an independent, investigative, reporting and accountability mechanism, is long overdue.