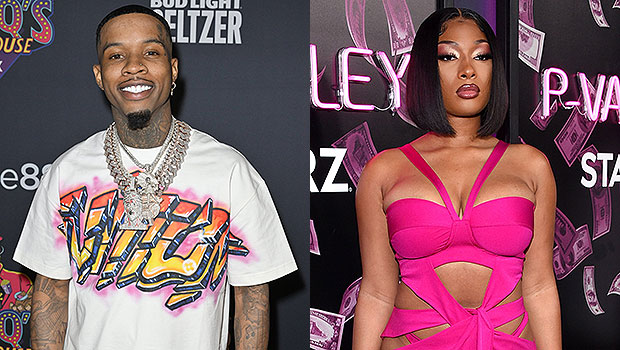 Tory Lanez was placed under house arrest until the start of his felony assault trial against Megan Thee Stallion. During a legal hearing in Los Angeles on Wednesday, Oct. 26, a judge ordered the rapper to stay at home with a GPS ankle monitor for almost a full month, as the charges of him injuring Megan in a 2020 shooting incident come before a court on November 28, according to TMZ. The judge’s decision stemmed from recent accusations that Tory physically assaulted singer August Alsina, per the outlet.

In case you missed it, August claimed Tory beat him up in September as he shared a photo of himself with a bloody face on his Instagram at the time. “There was never a “fight”! Simply an Assault,” August wrote in the lengthy caption.

During Wednesday’s hearing regarding the alleged attack, prosecutors argued Tory violated the conditions of his bail in Megan’s case and still poses a threat to public safety, per TMZ. Tory’s lawyer brought up the fact that there were no charges with August’s alleged incident, just accusations. The judge heard both sides and went with the house arrest verdict.

Back in April, Megan opened up about the infamous 2020 shooting incident where she was left wounded after Tory allegedly shot her following an argument about leaving a party early. “It was an argument because I was ready to go and everybody else wasn’t ready to go,” Megan told Gayle King at the time, explaining what transpired in the car before the alleged shooting. “But that’s, like, normal friend stuff. Like, we fuss about silly stuff all the time. But I never put my hands on anybody. I never raised my voice too loud. This was one of them times where it shouldn’t have got this crazy.”

She said she then got out of the car and that’s when the incident occurred. “It’s like everything happens so fast. And all I hear is this man screaming. And he said, “Dance, bitch.” Megan claimed Tory was shooting over the window of the car door in her direction. She added, “I was really scared ’cause I had never been shot at before.”

Since the alleged shooting, which reportedly injured her foot, Megan has remained relatively quiet regarding it, except for a few social media postings. Tory, who has denied any wrongdoing on social media, was arrested in connection with the incident. He was also later arrested again for reportedly violating a judge’s orders not to contact Megan. He posted bail on both occasions.