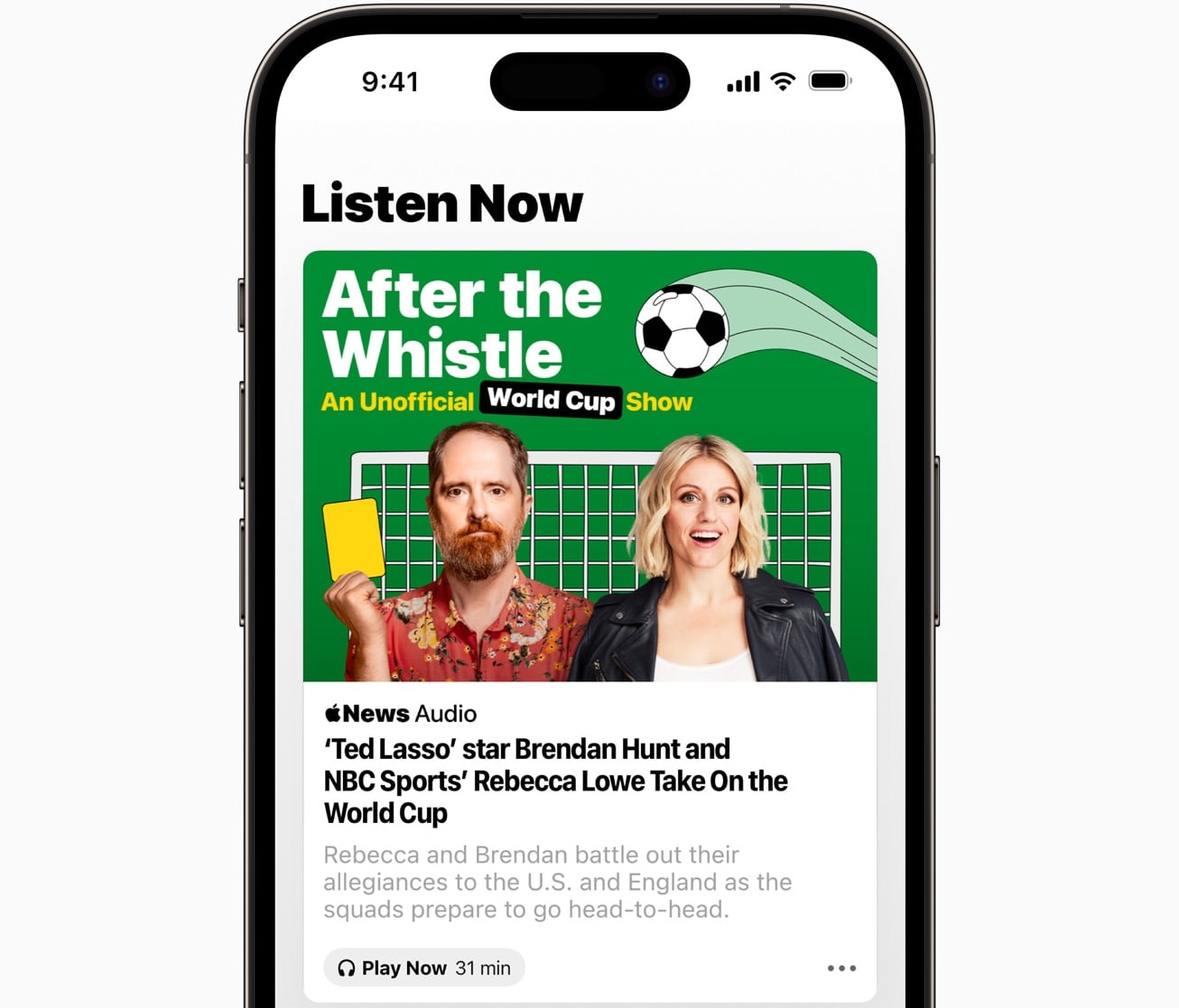 An amusing teaser trailer from Apple News on Monday introduced the new limited podcast After the Whistle, in which Coach Beard from the hit Apple TV+ comedy Ted Lasso — aka actor Brendan Hunt — and veteran English sportscaster Rebecca Lowe will explain everything about the world’s biggest sporting event, the World Cup, as it happens.

As you may know, the World Cup is a massive football tournament (to use the world’s sensible term for soccer). It kicks off Sunday in Qatar and will be broadcast globally. Apple News boots up the podcast on Thursday in anticipation of it.

The full name of the podcast is After the Whistle with Brendan Hunt and Rebecca Lowe. From the first episode on Thursday, you’ll be able to listen to it for free on Apple Podcasts and Apple News.

Episodes will pop up after matches “multiple times per week in the hours following momentous games,” Apple News said. It added that coverage comes “from the perspective of two bona fide football superfans.”

As Hunt points out in the trailer, you know him — if you know him — from his portrayal of Coach Beard on the Emmy Award-winning Apple TV+ comedy Ted Lasso. His character is second-in-command of the fictional English Premier League club AFC Richmond on the show, under the friendly head coach with the major-league mustache.

And in real life, Hunt’s a huge soccer fan of both the Premier League and Major League Soccer in the U.S.

And Rebecca Lowe, well known for about 20 years to Premier League fans in the U.K., has gained recognition since 2013 as an NBC Sports host covering Premier League matches broadcast in the U.S. She’s also known from her work as a daytime host for NBC’s Olympics coverage since Sochi in 2014.

All the action, plus some fun extracurriculars

“Next time I’ll bring a whistle,” Hunt joked at the end of the 60-second trailer introducing the podcast, making Lowe chuckle. The introduction suggested the podcast won’t be all analysis of action on the pitch. The hosts said they’ll teach you how to behave at a World Cup party, for example.

Here’s how Apple News describes what you can expect from the podcast, produced in partnership with Meadowlark Media:

Throughout the series, hosts Hunt and Lowe will recap all the exciting moments, battle out their allegiances to the American and English teams, and break down key plays, wins, upsets, off-field moments and more.

And Eddy Cue, Apple SVP of Services, added this:

Apple loves soccer — from Ted Lasso to Major League Soccer, and now two of the game’s most exciting voices delivering listeners their take on all of the biggest moments of the tournament. We’re proud to offer our users around the world great ways to follow all the excitement with After the Whistle and in Apple News.

Other podcasts to explore

And After the Whistle won’t be the only listening treat for footy fans. In Apple Podcasts, Hunt and Lowe hand-picked a “Listen With” collection of their favorite podcasts you can check out.

In addition, fans can find and follow their favorite teams in Apple News during the tournament to keep up with how they fare. And fans can automatically sync with the Apple TV app to watch matches.

“The Apple TV app will feature all 64 matches on FOX Sports as well as Telemundo’s Spanish-language broadcast of every contest on Peacock,” Apple said.