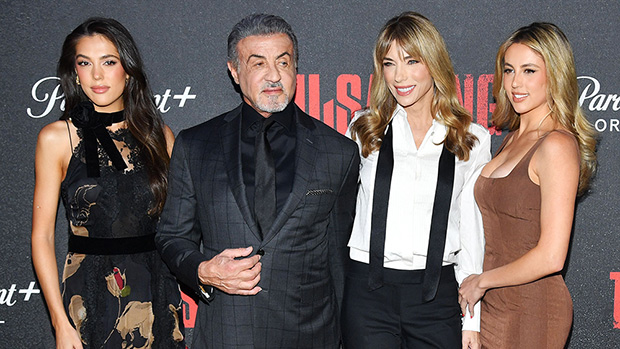 Sylvester Stallone and Jennifer Flavin were joined by two of their daughters, Sistine Stallone, 24, and Sophia Stallone, 26, at the premiere of Paramount+’s Tulsa King on Nov. 9. The foursome posed for photos together on the red carpet, looking like the picture perfect family. Sylvester and Jennifer have been putting on a united front over the past two months following their reconciliation after a brief split in August. It was almost a full family outing on Wednesday, but Scarlet Stallone, 20, was not in attendance.

“I used to have my priorities all screwed up. Work came first, and eventually, I came out of that delusional thinking, and they come first,” Sylvester admitted to Entertainment Tonight at the premiere, regarding his family. “So to actually have them here, that’s what it’s all about.”

Sylvester and Jennifer married in 1997 and fans were shocked when she filed for divorce in August 2022. However, less than one month later, the two confirmed they have reconciled. Now, the Stallone family is gearing up for their new reality show. Filming the show has allowed the actor to spend time with his family, while still putting some work in. A release date has not been revealed at this time.

It’s been teased that the show will feature the marital issues between Jennifer and Sylvester, but the 76-year-old also recently opened up to The Hollywood Reporter about what caused the split. “Sometimes I put work ahead of [my family] and that is a tragic mistake, which won’t happen again,” he insisted. He also admitted to the Sunday Times that the separation was a “tumultuous time,” which reawakened his love for his family. “It takes precedence over my work and that was a hard lesson to learn,” Sylvester shared.

Sylvester stars in the new Paramount+ series, Tulsa King, which premieres on Nov. 13.

Sylvester Stallone’s Wife: Everything To Know About His 3 Marriages After Reconciling With Jennifer