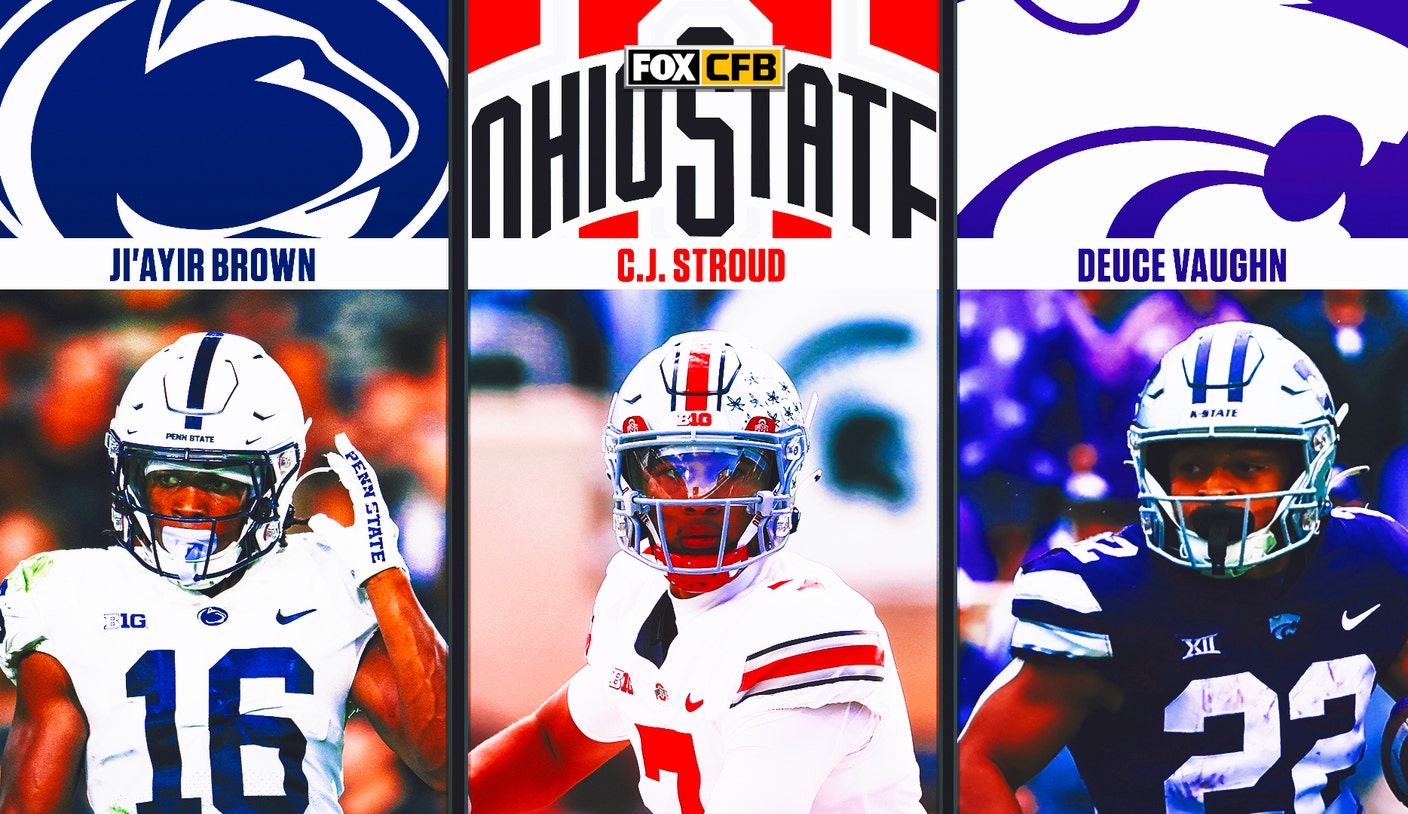 When evaluating college prospects for the NFL, so much of the focus typically zeroes in on physical traits — size, speed and strength.

At this point in the season, though, scouts are well aware of these. Now is when they begin to focus on intangibles — such as instincts and toughness — to determine which players their respective clubs will prioritize in the upcoming spring’s draft.

Fortunately, Week 9 boasts a bonanza of intriguing matchups with the biggest of all, logically, occurring first thing in the Big Ten.

Rather than bury the top story in Week 9, the festivities begin in earnest early with Heisman hopeful C.J. Stroud and the undefeated Buckeyes traveling to Happy Valley to face not only the most talented opponent on their schedule (so far), but arguably the most gifted secondary in the country.

Even with star receiver Jaxon Smith-Njigba struggling to recover from an early season hamstring injury, Stroud has performed brilliantly, pivoting to future early-round NFL selections Marvin Harrison, Jr. and Emeka Egbuka to cement his position as a truly exceptional quarterback prospect with an eye-popping 28 touchdowns against just four interceptions through seven games of his second season as Ohio State’s starter.

The statistics and tape both back up my argument that Stroud is simply the most accurate quarterback potentially available in the 2023 NFL Draft. His ability to consistently hit receivers in stride at every level of the field is why he will earn a top-five selection next spring, should he choose to leave early for the pros. There is no denying that he is aided by all the surrounding talent — including Ryan Day’s play-calling — but perhaps only New York Yankees’ slugger Aaron Judge hits the deep ball more consistently than Stroud.

While his pinpoint accuracy has scouts drooling, Stroud still needs to prove that he possesses the clutch factor. The reality is that Ohio State has simply overwhelmed opponents to this point in the season. Notre Dame is the only ranked team Ohio State has faced so far this season, and the Irish, No. 5 when they met back in early September, are now unranked at 4-3. As such, Saturday’s matchup against the Nittany Lions will be must-see scouting, especially on the few occasions that Stroud opts to challenge Penn State’s fellow future first-round pick and NFL legacy, Joey Porter, Jr.

C.J. Stroud has a wealth of weapons

The 6-foot-2, 195-pound Porter may rank behind safety Ji’Ayir Brown in interceptions, but he’s clearly the Nittany Lions’ top playmaker, currently leading the Big Ten (and ranking second in the entire country) with 11 pass breakups thus far this season. Long, lanky and instinctive, Porter is a nightmare for quarterbacks, corralling receivers at the line of scrimmage and shadowing them downfield.

Capable of shutting down half of the field by himself, Porter and the Nittany Lions have a chance to shatter Stroud’s Heisman and national title hopes in arguably the most scintillating “one-on-one” matchup of the day.

With Oklahoma State quarterback Spencer Sanders scoring 23 touchdowns (15 passing) against just four interceptions, it would be easy to highlight him in this space, especially with the Wildcats boasting one of the nation’s top pass rushers in Felix Anudike-Uzomah, who might be able to single-handedly slow Sanders in much the same way Porter could stun Stroud and the Buckeyes.

Anudike-Uzomah was highlighted back in Week Four, however, and anyone watching the hosting Wildcats knows that the very heartbeat of this team runs (and hard at that) with running back Deuce Vaughn.

Officially listed by Kansas State at just 5-foot-6 and 176 pounds, Vaughn is far from the physical prototype, but he may very well be the best pound-for-pound football player in the country, averaging a staggering 127 all-purpose yards with 35 touchdowns in 30 career games.

Vaughn nearly ran Kansas State to an upset victory over TCU last week, dashing for a 47-yard touchdown in the second quarter that put the Wildcats ahead 28-10. Kansas State was unable to build upon their lead, ultimately losing 38-28 to the undefeated Horned Frogs, but his exceptional agility, acceleration and soft hands have understandably drawn plenty of comparisons to a former Kansas State (and NFL) superstar with a similar build and skill set — Darren Sproles.

Deuce Vaughn showed off his speed and agility to score on a long touchdown run vs. TCU.

Vaughn was just starting elementary school when Sproles was drafted in the fourth round of the 2005 NFL Draft by the then-San Diego Chargers, but the comparisons to the former KSU legend might be appreciated by the man tasked with slowing him — Oklahoma State linebacker Mason Cobb — is also filling the “big” shoes left by Malcolm Rodriguez, an undrafted free agent starring for the Detroit Lions after dominating the Big 12.

With a total of just eight tackles a season ago, not even the most optimistic Cowboys fan could have forecast Cobb’s breakout season. He not only leads Oklahoma State with 61 stops but he also is tied for first with 8.5 tackles for loss with two sacks and an interception.

Like Vaughn, Cobb lacks traditional NFL size at “just” 6-foot, 230 pounds, but he explodes downhill with terrific speed and shows great body control to slither his way through gaps in the line of scrimmage. For a relatively young player, Cobb shows impressive instincts and confidence, trusting what he sees and demonstrating reliable wrap-up tackling skills.

This game will understandably be billed as a showdown between potential first-round quarterbacks Will Levis and Hendon Hooker, but with my breakdowns of both players already available here, let’s instead focus on two of their dynamic receivers.

The Wildcats found a superstar via the transfer portal a year ago in Wan’Dale Robinson (who originally played at Nebraska) and have done the same this season with Tayvion Robinson (unrelated), who came to Lexington following three stellar seasons at Virginia Tech.

Though not as productive as his namesake a year ago (now a member of the New York Giants), the latest Robinson offers a similar size (5-foot-10, 187 pounds), quickness and soft hands, leading the Wildcats in receptions (25), receiving yards (392) and touchdown receptions (tied with three). He is at his best out of the slot, showing plenty of make-you-miss ability, enough strength to break tackles, and the straight-line speed to turn short catches into long gains.

While Robinson has been quite effective for the Wildcats, no one has been better than the Volunteers’ Jalin Hyatt, who leads the country with 12 touchdowns on 40 receptions for 769 yards — much of that total coming in a jaw-dropping performance two weeks ago against Alabama.

For those who didn’t see it, Hyatt turned the Tide red in Tennessee’s 52-49 victory, hauling in six passes for a school record and SEC-tying five touchdown receptions. Ironically enough, the record Hyatt tied was last reached by former Alabama Heisman Trophy winner DeVonta Smith, who hauled in a handful of scores against Mississippi back in 2019.

Like Robinson, Hyatt excels out of the slot, though at a spindly 6-foot, 185 pounds he does it differently, gliding downfield in much the same way that Smith did for the Crimson Tide and now for the Philadelphia Eagles. He accelerates smoothly and collects the ball easily, showing excellent stop-start quickness to elude, vision to take advantage of downfield blockers and impressive top-end speed.

Given that the Wolverines have been featured in this space on a couple occasions, it seems silly that we haven’t highlighted star running back Blake Corum yet, currently leading the country with 13 rushing touchdowns — scoring more on the ground than Jim Harbaugh’s squad has collectively accumulated through the air so far this season.

Dating back to his days as head coach at Stanford and with the San Francisco 49ers, the former NFL quarterback Harbaugh has long been a fan of the running game, so perhaps Corum’s success is not surprising. Corum is far from the traditional Harbaugh back, however, measuring “just” 5-foot-8, according to the Wolverines’ official website. He is a rock-solid 210 pounds, however, possessing terrific leg drive and balance through contact to go along with his vision, elusiveness and burst.

The “Big Noon Kickoff” crew discusses the impact of running back Blake Corum on the Wolverines.

Last year, Kenneth Walker III (5-foot-9, 211 pounds) dominated the Wolverines with 197 yards and five touchdowns in the Spartans’ 37-33 victory. With Walker now starring for the Seattle Seahawks, the Spartans won’t be able to outrun Corum. Instead, they’ll be relying on defenders to slow him down. Ironically, along with middle linebacker Cal Haladay, it will be a former Wolverine in outside linebacker Ben VanSumeren tasked with stopping his former teammate.

VanSumeren was buried on Michigan’s depth chart but has since emerged as a standout starter for the Spartans in his second season in East Lansing. The 6-foot-3, 235-pounder may have the frame of a classic run-stuffing Big Ten linebacker, but he’s surprisingly light on his feet, possessing not only the physicality to intrigue scouts on early downs but the balance, agility and awareness to handle coverage duties, as well.

Those willing to stay up for this Pac-12 tilt will see and hear plenty about the dueling quarterbacks, with Stanford’s Tanner McKee and UCLA’s Dorian Thompson-Robinson each legitimate NFL prospects — and polar opposites. McKee looks even taller than his listed 6-foot-5, 230 pounds, and Thompson-Robinson is a classic dual-threat who has starred for Chip Kelly, albeit not as much a week ago in a road loss at Oregon.

Rather than simply focus on the quarterbacks, however, there is NFL-caliber talent playing along the line of scrimmage who rarely get the spotlight.

While virtually all the attention on UCLA has understandably focused on Thompson-Robinson and splashy running back Zach Charbonnet, the Bruins also boast one of the year’s breakout edge rushers in Laiatu Latu, a 6-foot-4, 265-pounder whose 6.5 sacks rank second in the Pac-12, and who also has 8.5 total tackles for loss and two forced fumbles.

For a big man, Latu shows good initial quickness, bend and coordination between his strong upper body and light feet, allowing him to elude pass blockers and efficiently close on quarterbacks. He originally signed with Washington but had medical concerns which prompted him to transfer. Ironically, his path is similar to that of former UCLA edge rusher Jaelan Phillips, who began his career on the West Coast only to transfer for a final breakout season at the University of Miami before the Dolphins made him a first-round selection two years ago.

Latu is looking to bolster his argument for postseason honors against a Stanford offensive line that has not played up to the previous levels we’ve come to expect from David Shaw’s bunch. Stanford has produced nine NFL Draft picks along the line of scrimmage since Shaw took over as head coach in 2011 and appear to have another one in left tackle Walter Rouse.

Unfortunately, Rouse has been hampered with an undisclosed injury the past two weeks and may not be able to suit up against UCLA.

Rob Rang is an NFL Draft analyst for FOX Sports. He has been covering the NFL Draft for more than 20 years, with work at FOX, Sports Illustrated, CBSSports.com, USA Today, Yahoo, NFL.com and NFLDraftScout.com, among others. He also works as a scout with the BC Lions of the Canadian Football League. Follow him on Twitter @RobRang.