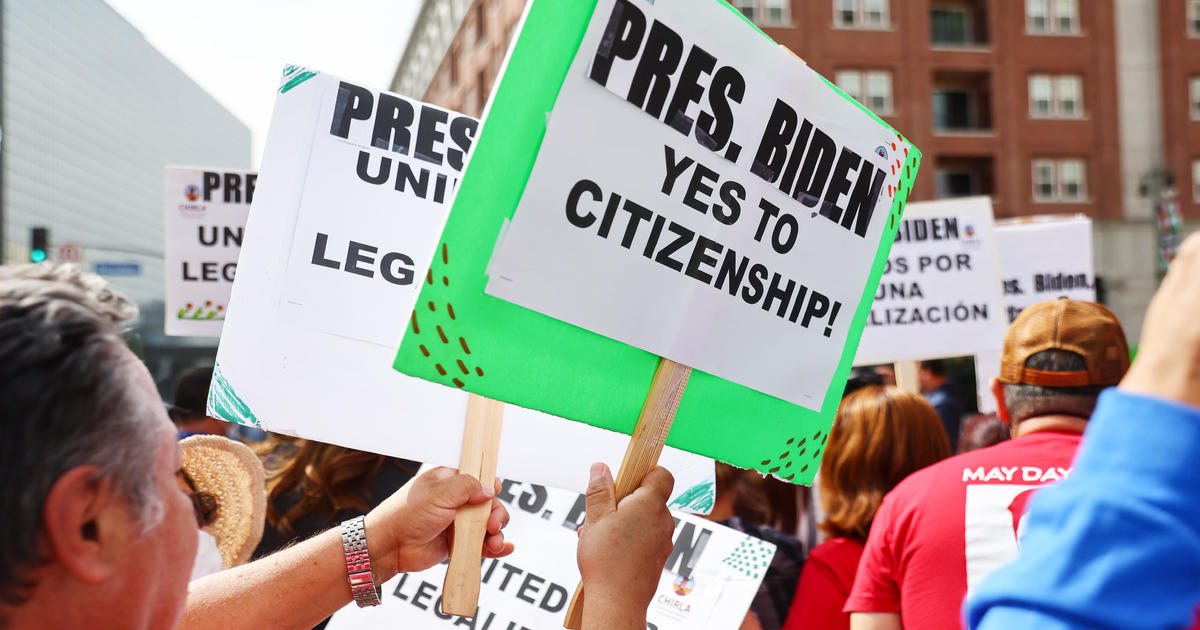 A majority of likely voters in five states with close Senate races in next week’s midterm elections support offering legal status to unauthorized immigrants in the U.S. under certain circumstances, a poll released Monday found.

Seventy-three percent of surveyed voters in Arizona, Georgia, Nevada, Pennsylvania and Wisconsin said they backed giving immigrants living in the U.S. without legal permission an opportunity to “earn” lawful status and ultimately citizenship if they meet certain requirements, including passing background checks.

Twenty-three percent of likely voters in the five battleground states said unauthorized immigrants should be deported, according to the survey, which was conducted by the Democratic polling firm Hart Research Associates and commissioned by the National Immigration Law Center, which advocates on behalf of immigrants.

The poll found that 74% of respondents would support candidates who favor placing “Dreamers,” or unauthorized immigrants brought to the U.S. as children, on a path to citizenship. Eighteen percent of the surveyed voters said they would back candidates who support deporting Dreamers.

The Obama-era Deferred Action for Childhood Arrivals (DACA) program, which allows approximately 600,000 Dreamers to work and live in the U.S. legally without fear of deportation, is currently under legal jeopardy after two federal courts declared the policy illegal.

Support for legalizing immigrants living in the country unlawfully, the survey found, was strongest among Democrats, independents and Latinos. Just 15% of Latino respondents did not express support for allowing unauthorized immigrants to secure legal status.

Proposals to legalize large groups of immigrants in the U.S. have faltered in Congress over the past two decades amid intense disagreements over issues like border enforcement. In recent years, many Republicans have vowed not to legalize unauthorized immigrants without tighter border controls.

While control of the House hinges on dozens of districts across the country, races in Arizona, Georgia, Nevada, Pennsylvania and Wisconsin could dictate which party holds the Senate, which is currently evenly split among Democrats and Republicans. Vice President Kamala Harris’ tie-breaking vote gives Democratic lawmakers fragile control of the chamber.

In Pennsylvania, Democrat Jon Fetterman and Republican Mehmet Oz are battling for an open Senate seat, and in Wisconsin, Mandela Barnes is seeking to unseat Republican Sen. Ron Johnson.

While Monday’s polls suggest a majority of likely voters in these five states support immigration views espoused by the Democratic Senate candidates, immigration is not the top issue on voters’ minds going into Election Day, according to the survey and other polls. Fifty-five percent of battleground state voters said the main issue dictating how they would vote next week would be inflation and the cost of living.

Moreover, national polls show that the record number of migrant apprehensions along the southern border over the past year and a half has become a political liability for President Biden and fellow Democrats, who Republicans have accused of supporting lax immigration enforcement. One poll last month found over half of Americans want the Biden administration to do more to prevent illegal border crossings.

Fifty-one of voters surveyed as part of a CBS News poll published on Sunday blamed Mr. Biden and Democrats for the situation along the U.S.-Mexico border, where officials stopped migrants nearly 2.4 million times in fiscal year 2022, an all-time high. Forty-five percent of respondents, meanwhile, said Democrats put the interests of immigrants who recently arrived ahead of U.S. citizens.

The survey commissioned by the National Immigration Law Center said 71% of likely voters in Arizona, Georgia, Nevada, Pennsylvania and Wisconsin support allowing migrants fleeing violence to apply for asylum along the southern border.

But Daniel Garza, president of the LIBRE initiative, a Latino outreach group with conservative views, predicted U.S. border policy will be an “anchor” weighing down Democrats in the election and could help Republicans regain control of Congress.

Garza said the Biden administration’s handling of the high levels of illegal border crossings has alienated Republicans who have previously been open to legalizing unauthorized immigrants in the U.S. “Because of the border situation, the issue has really infuriated a lot of Americans, including Latinos,” he said.

Camilo Montoya-Galvez is the immigration reporter at CBS News. Based in Washington, he covers immigration policy and politics.