“My BP Is High, Our Enemies Are Much”: James Brown’s Dad Breaks Down Amid Tape Scandal, Netizens React Controversial crossdresser James Brown has returned to social media with an update amid his ongoing tape scandal.

The effeminate celebrity shared a screenshot of his conversation with his father and the man appeared to be in a state of worry.

Brown’s dad told him that the whole matter has affected his blood pressure, adding that there are enemies around.

“My BP is high, please my lovely son be very careful. Our enemies are much,” the man wrote. 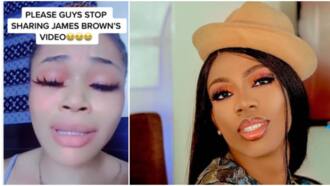 Sharing the screenshot, the crossdresser apologized to his father and promised to rise above the scandal.

“I am sorry Dad i feel your pain I promise to come back big and mighty I will not give up because you thought never to give up am so sorry I put through all this.”

“Your dad is on Snapchat?”

“I no even cm think say anybody well for this countryyour own papa Dey Snapchat?!!!” 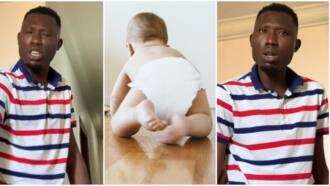 “I don tire”: Nigerian dad gets angry over high cost of diapers, tells wife to use one per day in video

Meanwhile, days after crossdresser James Brown’s leaked tape went viral on social media, a lady came out to claim to be the unidentified female in the clip.

The lady, who was in tears, begged netizens to stop sharing the video while claiming she mistakenly shared it.

The lady’s video which went viral sparked another round of reactions, with many dragging her for chasing clout.

One social media user who reacted to her video wrote:

“This one wan trend… your face no show madam.”