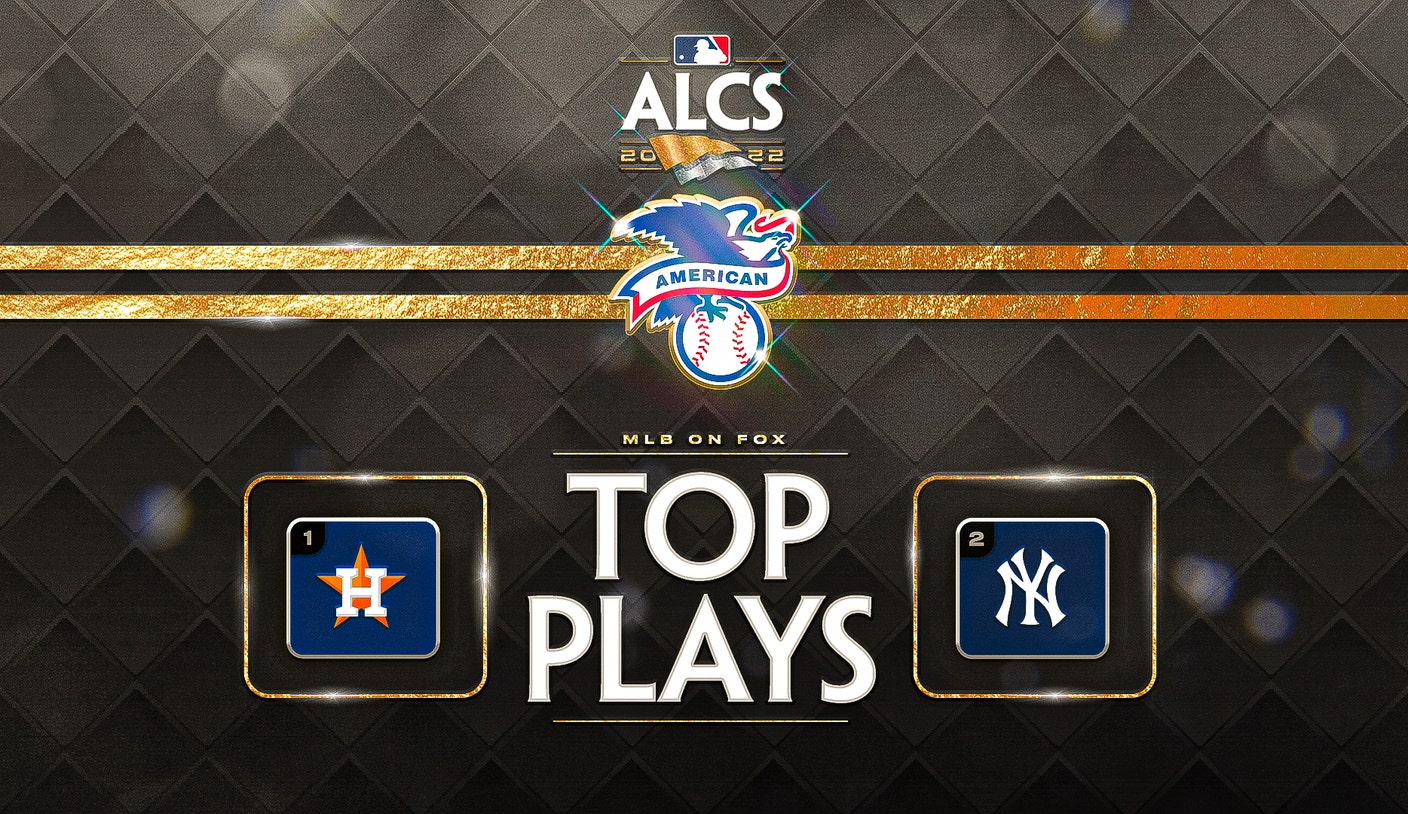 The MLB playoffs continued Sunday with Game 4 of the ALCS between the Houston Astros and the New York Yankees, which got under way after a weather delay.

Earlier, the Philadelphia Phillies beat the San Diego Padres in Game 5 of the NLCS, advancing to the World Series.

Here are the top plays from Sunday’s action.

After two of their first three batters reached base, Giancarlo Stanton got the Yankees on the board. New York’s designated hitter roped a single to right-center field, giving the Yankees a 1-0 lead.

Take ‘em how you can get ’em

Gleyber Torres hit a popup to shallow center field, which generated miscommunication in the Astros outfield and led to the ball falling in center. The single gave New York a 2-0 lead.

Yanks knock in another

One swing ties it

Houston got its first two batters on base to begin the top of the third. Then Jeremy Pena evened up the scoreboard, launching a three-run home run off Yankees starting pitcher Nestor Cortes Jr. to tie the game 3-3.

Houston Astros’ Jeremy Pena crushes a three-run home run to even the score against the New York Yankees, 3-3.

Cortes was removed from the game after giving up the homer to Pena with a presumptive injury. He surrendered three runs and five baserunners (three walks and two hits) while striking out two batters across two innings. Wandy Peralta took over for Cortes.

Yuli Gurriel smacked an RBI single through the right side of the infield, giving the Astros a 4-3 lead.

The Riz does it again

With two out in the bottom of the fourth, Rizzo smacked a single to center, scoring Harrison Bader from second base. It was Rizzo’s second RBI base hit of the game and tied the contest at 4-4.

New York got the lead back in the bottom of the sixth thanks to Bader’s fifth home run of the postseason. The solo homer to left off Hector Neris gave the Yankees a 5-4 lead.

Gleyber Torres and Isiah Kiner-Falefa weren’t able to connect on a would-be inning-ending double-play in the top of the seventh. Torres’ toss got past Kiner-Falefa, which put runners on first and second. Then Yordan Alvarez hit an RBI single to right field, evening the score at five.

The hit knocked Jonathan Loaisiga out of the game in favor of Clay Holmes.

The first batter Holmes faced was Alex Bregman, who hit an RBI single to right-center field. Bregman’s hit put the Astros up 6-5. Holmes stranded two runners in scoring position, though.

It was an easy top of the first for Philly starter Zack Wheeler.

You don’t see this often.

Bryce Harper has been cookin’ this postseason, and the hot streak continued Sunday.

The blast, followed by the hop-skip. Rhys Hoskins enjoyed this two-run dinger in the bottom of the third, giving his team a 2-0 lead.

Rhys Hoskins crushes a two-run homer to give the Philadelphia Phillies an early lead in NLCS Game 5.

In the top of the fourth, Juan Soto got his team on the board, admiring his work in the process and giving Philly a 2-1 lead.

Juan Soto cranked a solo home run to get the San Diego Padres on the board against the Philadelphia Phillies. PHI leads 2-1.

The moves speak for themselves.

The Phillies got another superb start from the right-hander, his second of the series. Wheeler was removed from the game in the top of the seventh after giving up a leadoff single to Jake Cronenworth. He surrendered two earned runs and three hits while striking out eight hitters across six innings. Philadelphia led 2-1. Seranthony Dominguez relieved Wheeler.

The first batter Dominguez faced, Josh Bell, came through for the Padres, roping a double to right field. The extra-base hit scored Cronenworth from second base, evening up the score at two apiece.

With two outs in the inning, Dominguez threw a wild pitch that went deep enough behind catcher J.T. Realmuto to score pinch runner Jose Azocar from third. The Padres took a 3-2 lead.

In the seventh inning of a tied ball game, Jose Azocar scores the go-ahead run for the San Diego Padres on a Seranthony Dominguez wild pitch.

San Diego removed the right-hander from the game in the top of the seventh after he surrendered a leadoff double to Bryson Stott. Darvish gave up two runs and seven baserunners (four hits and three walks) while striking out five hitters in six innings.

Robert Suarez relieved Darvish and got through the inning with the score still 3-2.

Harper came through with the biggest home run of his MLB career in the bottom of the eighth. The Phillies star hit a two-run home run to left off Suarez, putting the Phillies up 4-3.

The Philadelphia Phillies took a 4-3 lead over the San Diego Padres after Bryce Harper launched a two-run home run to left.

Things got sticky in the top of the ninth, as the Padres placed two men on base with just one out. However, Philly got out of the jam, and the series was over after an Austin Nola fly-out.

The Philadelphia Phillies advanced to the World Series for the first time since 2009 after defeating the San Diego Padres 4-3 in Game 5 of the NLCS.