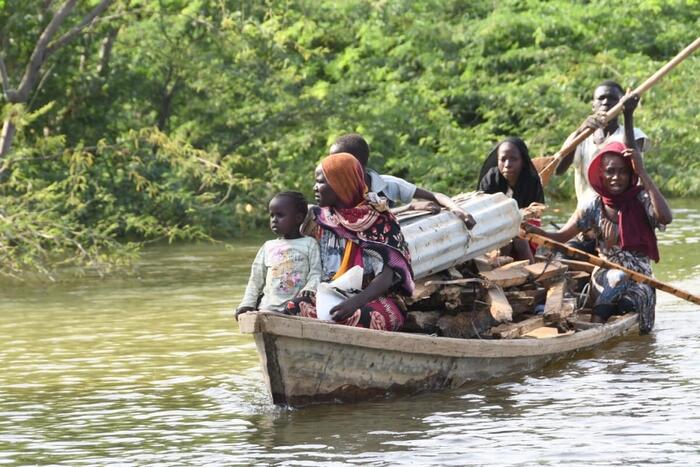 This is a summary of what was said by UNHCR spokesperson Olga Sarrado – to whom quoted text may be attributed – at today’s press briefing at the Palais des Nations in Geneva.

GENEVA – UNHCR, the UN Refugee Agency, is warning of surging needs for more than 3.4 million displaced people and their hosts in the face of recent destructive flooding in Nigeria, Chad, Niger, Burkina Faso, Mali and Cameroon.

Nigeria is facing the worst floods in a decade. Hundreds of lives have been lost, over 1.3 million people have been displaced, and more than 2.8 million have been impacted, according to UN estimates, as farmlands and infrastructure have been submerged.

UNHCR and partners have been providing shelter and essential aid to thousands of families, including 14,900 tarpaulin sheets and 550 kits with basic household items. In Taraba State, heavy rain has cut off affected communities in Baissa town from humanitarian assistance.

Chad’s Government has declared a state of emergency after floods affected more than 1 million people. In the south, heavy rains have caused the Chari and Logone rivers to burst their banks, submerging fields, killing livestock, and forcing more than 90,000 people to flee their homes and seek refuge in N’Djamena. In Cameroon, more than 63,000 people were affected by the flooding from the two rivers in the districts of Kousseri, Zina, Makari, Blangoua and Logone Birni.

UNHCR, local authorities, and other partners are rushing to provide humanitarian assistance in N’Djamena and have identified two sites to shelter disaster survivors.

In the countries of the Central Sahel – Niger, Mali and Burkina Faso – above-average rains and flooding have killed hundreds, displaced thousands, and decimated over one million hectares of cropland.

Some 379,500 internally displaced people live in Burkina Faso’s flood-affected areas – in the Sahel, Central North and Northern regions. Over 32,000 people have been affected by flooding in the Diffa region of Niger, and more than 13,000 have been displaced. This year, more than 41,000 people have been affected by flooding throughout Mali, compared to 10,511 in 2021.

The climate crisis is happening now – destroying livelihoods, disrupting food security, aggravating conflicts over scarce resources and driving displacement. The link between climate shocks and displacement is clear and growing. Worsening climate shocks in the Sahel in particular have fueled drought and flooding, lowered crop yields and contributed to a general deterioration in public services for one of the world’s worst displacement crises. Temperatures in the Sahel are rising 1.5 times faster than the global average. This is exacerbating underlying challenges States face to manage rapidly growing populations, a reversal of development gains and encroachment by non-state armed actors.

Beyond the Sahel, we are witnessing the worst drought in 40 years and the threat of famine in the Horn of Africa, a devastating cyclone season in Mozambique and historic floods for a fourth consecutive year in South Sudan and Sudan. Extreme weather across the African continent in 2022 has killed hundreds and forced millions to flee their homes.

Countries and communities on the frontlines of the climate crisis need urgent support and financing to build defenses, to adapt, and to minimize the most harmful consequences.

UNHCR is appealing to all donors for urgent support to our life-saving work in West and Central Africa.