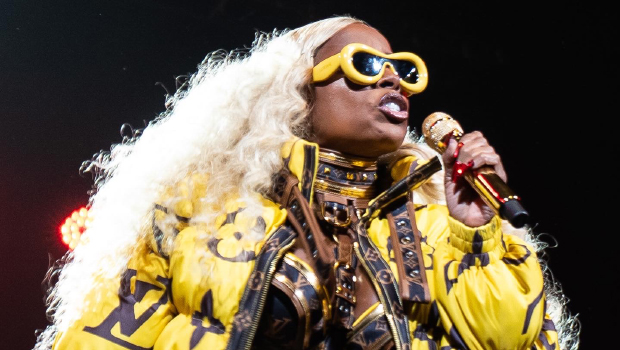 Mary J. Blige was an incredible sight to see during a concert in Brooklyn, NY on Thursday night! The 51-year-old singer, who is on her Good Morning Gorgeous Tour, rocked a yellow and black Louis Vuitton ensemble that included a harness top under a puffer jacket, hot pants, and thigh-high boots on stage. She also added thick yellow-framed sunglasses as her long blonde hair was down and her long red nails were on full display.

The outfit also included a thick choker-style necklace and straps that hung down over her thighs. Every part had the Louis Vuitton symbol on it, making her a picture perfect rep for the brand. In addition to singing her heart out during some of her biggest hit songs, she busted some moves in front of the excited crowd.

Mary was joined by backup dancers at certain parts of the show. Some were hunky men who wore flowing yellow button-down shirts that were open, flaunting their muscular chests, black PVC style pants, and matching bucket hats. They complimented her greatly as she took over the show through her talent and charisma.

After the show, Mary and others had fun at an afterparty and she changed outfits for the occasion. Her new getup, which can be seen here, included a long-sleeved black and white patterned button-down crop top that was lined in pink and matching leggings. She topped off the look with black thigh-high heeled boots and struck poses for the cameras as she walked outside.

When Mary’s not wowing at concerts or afterparties, she’s giving in-depth and honest interviews about her life. The talented star, who was a previous stepmom to her ex-husband’s three children, revealed why she doesn’t want kids of her own, in an interview earlier this year and it has to do with the “freedom” in her life. “I like my freedom to go and move and do what I want to do,” she told E! Daily Pop. “I don’t want to have to tend to someone all the time.”

Mary J. Blige’s Husband: All About Her Past Marriage To Kendu Isaacs & Other Romances