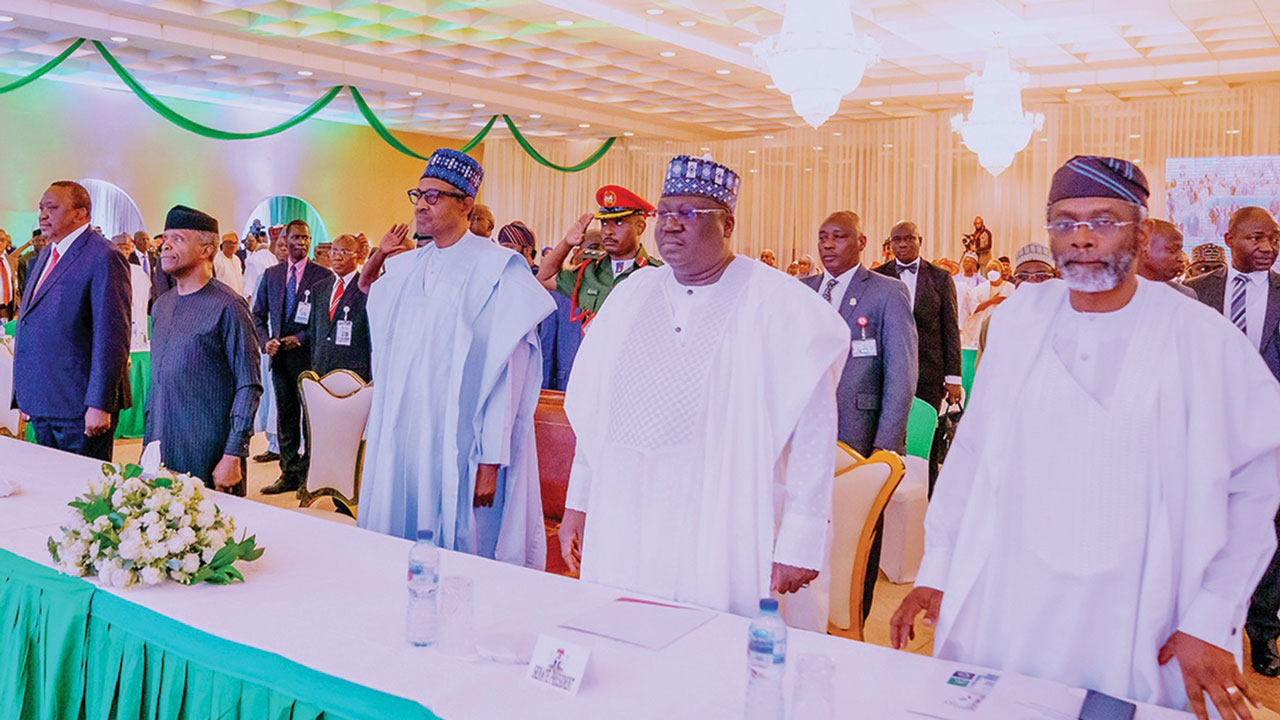 According to Chief Awolowo, the emirs’ comment on this appeal for cooperation, as contained in the official report of the conference, can be summarized as follows:

Holding this country together is not possible except by means of the religion of the Prophet [Mohammed]. … If they [the South] want political unity let them follow our religion. (Awolowo, Obafemi, Path to Nigerian Freedom (1947), p. 51)

In other words, the condition given by the emirs for peace and unity in Nigeria is that Southerners must become Moslems and must all come under the Sokoto Caliphate.

Sir Ahmadu Bello was the first person that tried to colonize the rest of the country in post-independence Nigeria and turn it into a part or vassals of the Fulani Caliphate, in order to fulfill the wishes of the Northern emirs, of which Chief Awolowo had earlier informed us about. Ahmadu Bello, the Fulani leader of the NPC, had become the political leader of Northern Nigeria following the conspiracy of the British colonialists with the Northern emirs that effectively rigged out Aminu Kano, (the prudent federalist, egalitarian, anti-jihadist, anti-feudalist Fulani leader of the NEPU), who was poised to win the staggered 1951 Northern Regional elections, and, hence, help unify Nigeria. Ahmadu Bello used the Nigerian Army to attack the Tivs in the Middle Belt, who had from pre-colonial times frustrated Fulani jihadist expansion into Tiv land and had stood in opposition to Ahmadu Bello’s autocratic rule in Northern Nigeria.

Later, Ahmadu Bello and his NPC exploited the 1962 split in the Action Group (AG) with a view to gaining political control of the Western Region. He was on the verge of using the Army in Western Nigeria in the same way he used them in Tiv land when he was stopped by Nzeogwu and Co. In effect, it was the attempt by Ahmadu Bello to incorporate the rest of Nigeria into the Sokoto Caliphate that brought about the military coup d’état of January 15, 1966, which eventually degenerated into the Nigeria-Biafra war (1967-1970).

Unfortunately, Buhari seems to have bought this caliphate idea many decades later and has since his re-emergence as Nigeria’s head of state in 2015 appear determined to foist same on 21st century Nigeria.

Indeed, President Muhammadu Buhari has risen to the occasion and has more than Sir Ahmadu Bello trampled on Nigeria as a modern federal state, reducing it to a virtual Fulani empire or caliphate in the last seven or so years. He has handed the commanding heights of Nigeria’s security, military, police, administrative and economic institutions, etc., primarily to the Fulani and their collaborator-Kanuri elite, and has ipso facto caged Southern Nigeria and the Middle Belt into effective vassals of that empire. Our notions of democracy and rule of law seem technically suspended or put in abeyance. That of course amounts to turning the clock of Nigeria 200-300 years back; to the formative years of the old Fulani caliphate. And that is what has brought Nigeria back to the austere barbaric life of the said bygone centuries. This in a nutshell is what has polarized Nigerian politics today, created so much inter-ethnic and religious distrust, tensions, enmity and insecurity in the country as well as disrupted social and economic progress and development in Nigeria.

Talking about caging the South and the Middle-Belt, we like to observe that General Burutai, our retired ex-chief of Army Staff has been posted to the Republic of Benin, ostensibly as an envoy. But actually to assist Colonel Ali, the soldier-turned-Custom’s chief, in policing Nigeria’s border with Benin Republic and to ensure especially that nothing ‘untoward’ goes in or out of Southern Nigeria and the Middle-Belt through Nigeria’s southwest border with Benin Republic. In the East, another retired service chief is in the Cameroun to keep an eye on what comes in or out of Southern Nigeria through our southern border with Cameroun. Even the possession of licensed bolt-action cartridge gun has been more or less banned in the South and Middle-Belt by Government. All these seem part and parcel of the caging process and the creation of a totalitarian state where human beings will be herded like cattle under the grip of an absolute ruler as well as to perfect the monopoly of means of coercion and foist a forceful reign of terror on the disarmed. However, these actions and efforts will ultimately prove to be exercises in futility, for acts of colonization, apartheid and totalitarianism is no longer in consonance with the times!

This is the age of freedom, of reason, democracy and knowledge-based systems and modernity. Repressive systems like empires, totalitarianism, etc., are on the way out and will always crumble like a pack of cards! Where are the great Soviet Union, Yugoslavia that was once under Marshal Tito’s iron grip, Czechoslovakia and Apartheid South Africa? What about the British, French, Spanish and Portuguese empires? All these totalitarian states, colonizing empires and apartheid regimes have all crumbled, gone. Will the Fulani Empire be the only tree standing? How vain and short sighted! The tendency to rely on naked force and all manner of manipulations in the management of human beings and communities may work for a while but they do ultimately disappoint, creating frictions and tensions that usually bring regrets. So, turning the hands of Nigeria’s clock a couple of centuries back will not wash. It does not help the average man on the street. Indeed, it has already plunged many into sorrow, hunger and lamentations even in the North and amongst the Hausa and the Fulani, for their peasantry is the most affected and oppressed by Northern feudalism. So, like the other bygone command economies and polities, Nigeria’s Apartheid and state capture will not endure!

Buhari’s sly and fuzzy rule presents us with a window into what a full-blown retreat into the out moded world of the old Fulani Empire offers Nigeria. The Igbo say that the foul-smell of fart gives us an idea of what the taste of faecal matter would be like. Nigerian peoples are now well aware of what the Buhari presidency has fetched despite all the goodwill and hope heaped on it; on a man we took for a beloved brother and well-meaning patriot! And those at the receiving end across the country are already weeping in terrible anguish and terror when Buhari’s‘new caliphate’ is yet to reach its nadir.

To be continued tomorrow