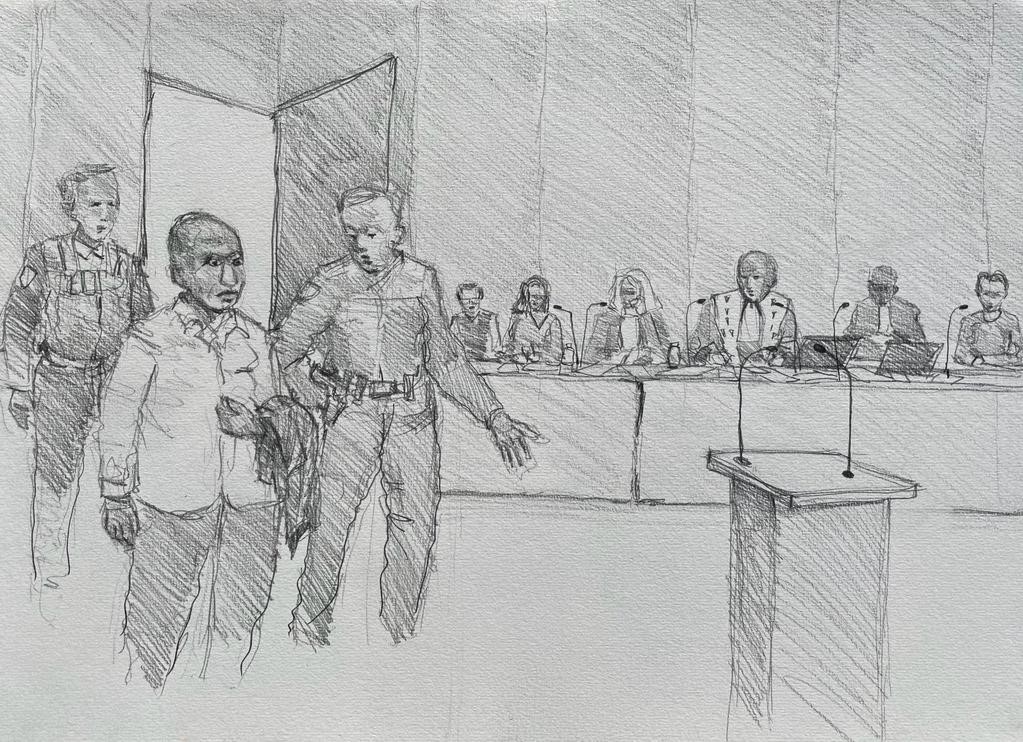 PARIS, France – Alieu Kosiah, convicted of war crimes in a Swiss court last year, appeared as a defense witness in the trial of Kunti Kamara, his one-time United Liberation Movement of Liberia for Democracy colleague today and rejected the charge that Kamara had committed cannibalism.

Kosiah, who travelled from Switzerland under heavy guard, was not cuffed but he was accompanied at all times by two French police officers. The two former allies looked at each other but they did not greet or communicate in any way.

Kosiah was asked about one of the key events in the case against Kamara, the murder of a schoolteacher in Foya during Ulimo’s four-month occupation of the district in 1993.

The schoolteacher’s sister, mother, brother-in-law and friends have testified that Kamara tortured the man for two days before ordering him killed, his rib cage cut open and his heart cooked and eaten.

“Mr. President, let’s forget about human heart because we know that it’s ridiculous,” Kosiah said. “Let’s come to goat. If you have a chef and he gave you the heart. Can anybody here eat it?” said Kosiah.

Kosiah denied Ulimo took part in such acts and alleged it was instead the descendants of African Americans who settled the country in 1822, often known as “Congos”, who consumed human flesh.

The court was crowded with lawyers, journalists and human rights activists who had come to see the spectacle of one war criminal testifying in the trial of a man accused of war crimes.

READ ALSO: Psychologists examine ‘I can kill you, nothing will happen’

They also wanted to see Kosiah whose combative behavior and outspokenness in the Swiss court had earned him notoriety.

Kosiah did not disappoint questioning at the outset, as he had in his own case, the legitimacy of two white judges hearing the case (a third judge in Kamara’s trial is of African descent.)

The decision to bring Kosiah to defend Kamara was a risky move by the defense. The jury may well interpret Kamara’s association with Kosiah as a sign of guilt.

At first Kosiah did offer a defense of Kamara’s claim that Ulimo committed no atrocities in Foya. It was the same argument Kosiah made in his trial and will make in his appeal in January.

In a parked courtroom, Both Kosiah and Kamara looked at each other, but couldn’t speak to each other.

But Kosiah repeatedly denied Kamara’s claim that he was a battlefront commander.

“No, no,” he responded to a question from Thierry Fusina, the court’s president. “I don’t know whether he was a battlefront commander for Foya, but for Ulimo, he was a fighter.”

Kosiah also dismissed Kamara’s testimony that he had 80 men under his control.

Kosiah claimed he was Kamara’s superior.

“When I met Kundi for the first time, it was in Foya. There was never a day that Kundi and I stood to talk because I was a superior officer. When I was passing, he will say ‘Yes Sir!’” said Kosiah.

“They captured Foya. That’s where he was at that time,” Kosiah said of the capture of Foya by Ulimo. “I cannot confirm that, I cannot deny. I was not there when Foya was captured.”

Kamara and several witnesses have said Kosiah was in Lofa with Ulimo at the time.

Kosiah claimed Kamara was standing trial because of him.

“I am the one that put Kundi in problem,” he laughed. Kosiah said he told investigators in his own case to ask Kundi if he was in Lofa. “If he says I was in Foya, then, I plead guilty, because I was not there. As far I am concerned, Kundi is object in this case. And I am object.”

Kosiah and Kamara have repeatedly demonstrated an apparent failure to understand how each testimony can hurt the other. Legal analysts said Kamara’s testimony in Kosiah’s case that he had been in Lofa helped seal his conviction.

Lawyers on both sides of Kosiah’s case have been in the court gathering evidence for Kosiah’s appeal in Switzerland in January.

In court today Kosiah also undercut Kamara’s claim that Ulimo had not committed any atrocities in Lofa by confirming witness testimonies of looting and forced labor by Ulimo soldiers.

But later, on cross examination, an agitated Kosiah contradicted himself.

Kosiah was often agitated and cheeky in his response to questions from judges and lawyers.

As he did in his own trial, Kosiah repeated allegations that Civitas Maxima, the Swiss based human rights organization, and its Liberian partner the Global Justice and Research Project coached and bribed witnesses to lie about alleged Liberian war criminals.

“They go to Liberia. They manipulate people in Liberia to come and testify against old fighters. Once you fight, not because of what you did, for Alan Werner, automatically you are a criminal,” he said.

Kosiah also quoted a document he claimed to have obtained from Alan White, a former chief investigator for the UN-backed Special Court for Sierra Leone, that has evidence condemning the two organisations. The organisations have always denied the allegations.

Earlier in the day there was an awkward moment when it became apparent that a defense witness flown from Liberia to Paris at the expense of the French taxpayer, only spoke Kissi.

The man, who was also partially blind, appeared in court with an English-French translator just long enough to demonstrate to everyone that he would not be able to testify.

In a second blunder, an attempt to bring a Kissi speaking translator from Brussels was thwarted when he was denied boarding on the flight because they had only been given a one-way ticket.

Judge Fusina announced the witness would return to Liberia that day and arrangements would be made for him to testify from Monrovia by video next week.

A prosecution witness who was hospitalised shortly after his arrival from Liberia last week has been released and will appear in court on Wednesday.

The first testimony of the day came from Christian Ballouard, a psychologist based in Paris who had examined three of the 9 plaintiffs in 2018 and 2019. His task was to assess their mental state for two purposes: firstly to ascertain whether they were mentally or psychologically impaired in some way that might make their testimony against Kamara unreliable in.

Ballouard’s second task was to assess whether they had incurred long term psychological injuries as a result of the trauma that said they endured.

The psychologist testified that each of the men was suffering trauma in his own way. Ballouard made much of one plaintiff who testified that his mother and sister were killed within a week by Ulimo.

Ballouard said the man carried a tremendous guilt that he did not help his sister, or warn her in some way of Ulimo’s approach, even though he knew that doing so would have cost him his life.

Two of the plaintiffs were still deeply impacted by the barbarity they witnessed he said – the cannibalism, butchering of humans and rape. In two cases, he said, conversion to a new religious belief – in one case Mormonism, in another case Jehovah’s Witnesses – had provided some relief from their traumas.

The psychologist assured the court that all three men were not impaired in any way that might make their testimony questionable. Marilyne Secci, Kamara’s defense lawyer, repeatedly challenged the psychologist as to whether the plaintiff’s memories could have changed over time and been shaped by the broad trauma that all Liberians were suffering during the war.

Ballouard said each person processes trauma in a different way, but it was very clear to him that in each case, the trauma that the plaintiffs had testified about was the cause of their trauma.

Sabrina Delattre, lawyer for the civil parties, asked the psychologist to explain why some victims who could not identify Kamara when they were given 9 photographs of Liberian men his age to choose from, then identified him with great conviction in the courtroom.

It made complete sense the psychologist explained some people are better at identifying people based on facial recognition. Other people recognise other factors such as voice, gesture, physical presence. A photo may not give these people enough information to use to identify a person.

The trial continues on Monday.

This story is a collaboration with New Narratives as part of the West Africa Justice Reporting Project.