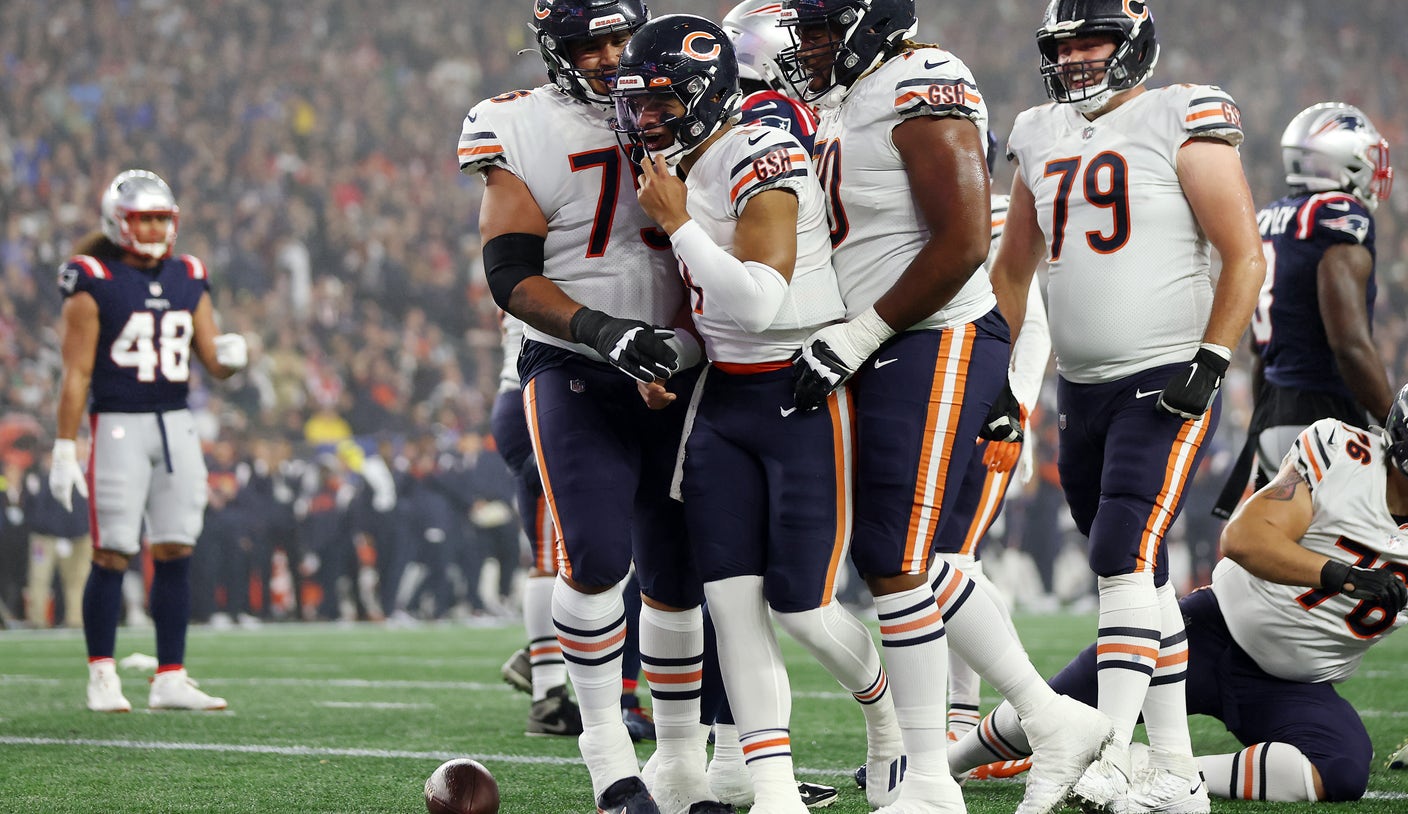 The Chicago Bears may not have a bye week until Week 14, but they took advantage of an 11-day break between Thursday night, Oct. 13 against the Washington Commanders and this Monday night against the New England Patriots, coming out victorious over the latter behind a slew of adjustments.

Virtually no one had the Bears winning their first game in Foxborough via blowout on their Week 7 bingo card, but Chicago came out swinging and never let up. They got a complete effort from all three phases, with the defense recording four takeaways and kicker Cairo Santos connecting on four field goals, including one from 50 yards.

But the real story of the night was quarterback Justin Fields, who played his best game as a Chicago Bear thanks to some crucial changes made by the Bears coaching staff. Instead of fighting against Fields’ skillsets, trying to fit a square Fields into a round Aaron Rodgers-sized hole, offensive coordinator Luke Getsy instead emphasizes the young QB’s strengths.

There were more designed runs on which Fields could use his legs. There were more opportunities to go off-script and make plays off scramble drills. The run game also stepped up in a big way, giving Fields something to lean on. The Bears ran 45 times for 243 yards (Fields accounted for 82 of those yards as the team’s leading rusher). It allowed the offense to get into quite a rhythm as they cruised to 390 total yards and 33 points.

The Bears converted 11 third downs on the night, which is tied for the second-most by a team in a win over the Patriots in the Belichick era. A lot of them came as a direct result of Fields himself.

The last drive of the second quarter was a perfect example of Fields keeping drives alive. He converted a crucial third down with his legs to get the Bears inside the New England 10-yard line. Fields was sacked on second-and-6, losing eight yards in the process. But on third-and-14, Fields pulled the ball and ran up the middle for 20 yards, getting the Bears to the New England 21.

“I thought they were good,” Fields said of his designed runs. “I thought it brought a whole different element to our offense. I think we executed that well and there were definitely some explosives in those designed runs for sure.”

As a bonus, two plays later, Chicago again found itself with a long way to go thanks to another sack on first down that set up second-and-25. Fields got nine yards on second down and then on third-and-16, he launched the ball to wide receiver Darnell Mooney, who picked up 17 yards and the first down at the New England 10.

“It makes our offense more complex, just getting us out the pocket and more designed quarterback runs,” Fields continued. “It opens it up a little bit more. Just doing a lot of different things on offense.”

It was part of a more complete offensive plan that saw a 45/32 split between runs and passes, respectively, keeping a solid New England defense on its heels. Matthew Judon was still Matthew Judon, of course, but the Bears won the turnover margin by three. The New England defense was also on the field disproportionately, losing the time-of-possession battle by nearly 15 minutes.

Couple that with how many different things the Bears were throwing at them, fresh off 11 days’ rest, and Chicago’s second-year quarterbkac, if you’ll excuse the wordplay, had a Fields Day.

“I think that creates an issue sometimes for the defense, depending on what defense they’re in,” head coach Matt Eberflus said of Fields’ variable skillset. “Certainly, when you have a quarterback that has the designed runs with the run pass off of it and then also having the ability to scramble and make first downs, I think that’s hard to defend. I think Justin did a good job of that today.”

Against the Patriots, their third-down success rate was 61.1%. They had a season-high 24 first downs and Fields threw for 147 yards on 32 attempts. Their rushing yardage skyrocketed to the aforementioned 243 yards and most importantly, they seemingly turned a corner. There is light at the end of the tunnel.

“It is important,” Eberflus said of the win after the game. “The whole country was watching us and I think that’s important for confidence for the guys.”

Carmen Vitali covers the NFC North for FOX Sports. Carmen had previous stops with The Draft Network and the Tampa Bay Buccaneers. She spent six seasons with the Bucs, including 2020, which added the title of Super Bowl Champion (and boat-parade participant) to her résumé. You can follow Carmen on Twitter at @CarmieV.