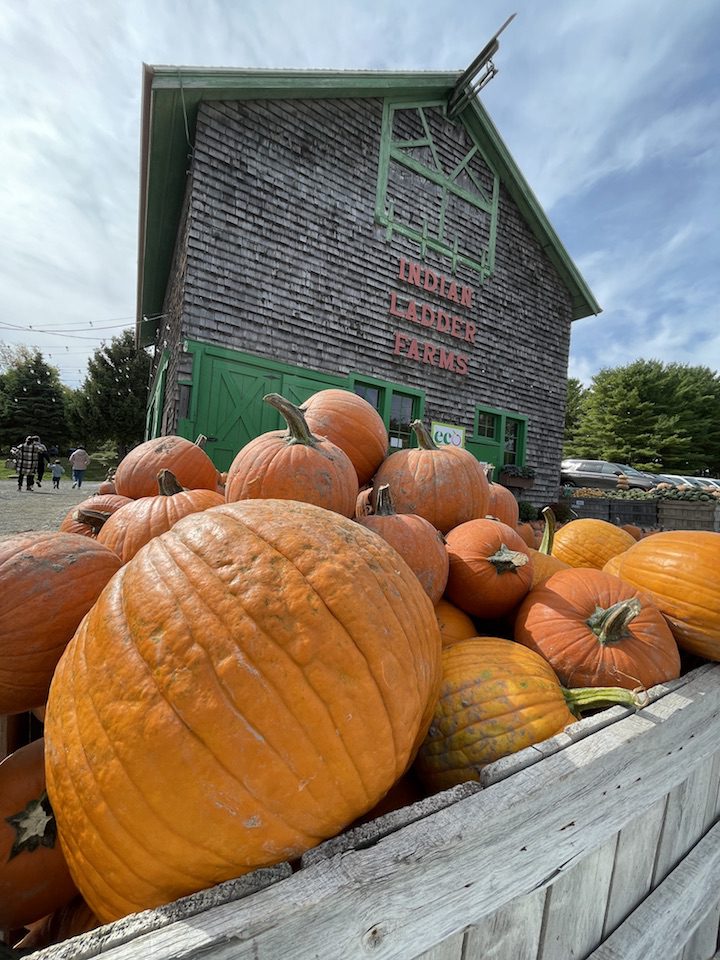 “We’re an apple orchard with a farm market with a side of brewery,” she said. “We have restaurants. We grow other crops. We do pick-your-own. We have an educational program. We do private events here — everything from children’s birthday parties to weddings. We have a bakery and gift shop. We sell a lot of merchandise from other farms.

“And that’s basically what we do. It’s more than just a farm, and it’s a year-round thing.”

Laura manages the farm with her brother, the family’s fourth generation on the farm. The land has remained in the family since 1915 when Peter G. Ten Eyck started the farm at the foot of The Helderberg Escarpment. From the apple orchards behind the market, visitors can see the Indian Laddar Trail from which the farm shares its name. Laura’s father owns the farm today.

The farm has expanded into various endeavors through the generations. Once a dairy farm, the Ten Eycks adapted to fruit and cattle after a fire in 1949. The fruit became a lucrative business. Their apples were sold wholesale with the cider apples going to the Motts Cider Mill in Voorheesville and its pears to Beechnut Baby Food. The cattle business was discarded nearly 15 years later.

Today, Indian Laddar Farms is one of several destinations across the Capital District that draws families in to take home apples, donuts and cider this time of year. The direct sale to the community has prompted a recent rebranding of an independent certification program, to which the farm has been involved with for years.

“The support and patronage from the community has been overwhelming since we started pick-your-own apples in late August,” she said. “We’re looking forward to another successful year and seeing our returning families continue their traditions and fall celebrations.”

EcoCertified, certification program under Red Tomato, awards growers who follow the most  ecologically-sensitive growing practices available for locally grown tree fruit in the Northeast. It is a community of farmers, scientists, and advisors, whose practices are based on creating an orchard ecosystem that supports pollinators, keeps damaging insects in balance with natural predators, and promotes soil and tree health.

The program was established in the 1990s, following a media campaign against the spraying of daminozide on apple crops. The chemical was used by orchards to keep apples from dropping off the trees before they were ripe. Actress Meryl Streep led the effort to stop its use over fears it could cause cancer.

EcoCertification supports the best ecological farming practices for our region. Growers in the Northeast are longtime leaders in adopting and promoting eco-friendly practices that adapt to growing conditions and climate. The Eco program brings the expertise of scientists and farmers throughout the region together to maintain a rigorous growing protocol to protect pollinators, promote soil and tree health, and treat orchards as holistic ecosystems.

Most ecological farming practices aren’t the same for every locale. Even though the  Northeast grows some of the best apples in the world, over 93 percent of certified organic apples sold in the U.S. come from western Washington. The climate in the Eastern U.S.  is very different––more rain, more diseases, and over 60 species of damaging insects––and the national organic standards do not always offer the most sustainable treatments for those conditions. For responsible growers and conscientious eaters in the eastern U.S., EcoCertified offers the best combination of Local + Ecologically grown fruit.

“One of the highlights of being an Upstate New Yorker is our beautiful fall season, with all the cherished traditions that come along with it,” said Assemblymember Patricia Fahy. “In the Capital Region, our apple growers aren’t just a source of family fun and memories, but an important driver of economic activity and an anchor of New York’s agricultural exports. I want to commend Red Tomato for achieving certification under the Eco-Certified program for their newest orchards, showing a commitment to both delicious produce and our planet. I encourage all New Yorkers to take advantage of this special time of year by joining family or friends to visit one of our many orchards and farms that will open their doors to the public.”