“Heaven Is the Goal”: Ex-BBNaija Star Leo da Silva Shocks Many As He Becomes a Pastor, Reactions Trail Video Former Big Brother Naija (BBNaija) star Leo da Silva has stunned many of his fans and followers with the new job he has decided to take up.

The brand influencer was seen in a viral video online preaching about faith and how people could build their relationship with God.

“Family has advised him many times”: 47-year-old man refuses to marry, says he can cook for himself

Leo told the congregation he was addressing that they should try and understand God in their pursuit of happiness.

The reality TV star further told his audience that only through assurance in their faith in God can they be truly happy and fulfilled.

However, many have kicked against Leo’s newly found pastoral career path, noting that it is just a ruse to draw attention to himself.

See the video of Leo da Silva preaching below:

“I didn’t know this side of you… Hats off to you broski.”

“Gotta have faith with understanding.”

“Nobody wey God no fit use.”

“God can use anybody…. Forget the past.” 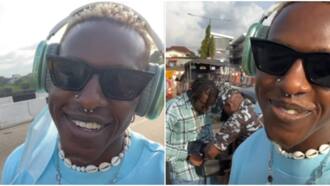 “Even celebrity status no stop am”: BBN’s Hermes shares video as police stops, searches him on the road

“Na him side hustle be that allow the guy hustle in peace jare.”

“What God cannot do, doesn’t exist.”

“This guy will make a good pastor,see how he analyze am.”

The former Big Brother Naija star replied to a post about writing a will at the age of 25 as he revealed that he wrote his first at that age.

Social media users across the country have reacted differently to the conversation between Leo Da Silva and the fan. People had different opinions as they disagreed with both of them.