Google Pixel tries, fails, to dunk on Apple CEO Tim Cook with a tweet sent from an iPhone 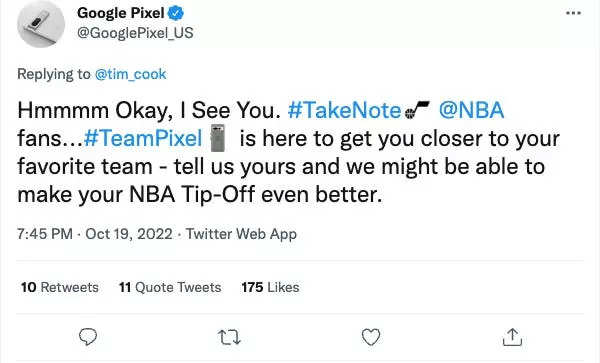 If you’re a rival smartphone maker and try to throw shade at Apple, at least make sure you’re not using an iPhone to do it.

That’s exactly what happened to Google Pixel on Twitter on Wednesday. The Google Pixel account tried to take a dig at Apple CEO Tim Cook, but was quickly called out by users who noticed its tweet was sent from an iPhone.

Cook tweeted a promotional video hinting at an Apple announcement with the tagline “Take Note” in the video and in a #TakeNote hashtag alongside his tweet that says, “The possibilities are endless.”

Discover the future of SaaS in India

The 6-part video series will capture the vision of Indian SaaS leaders and highlight the potential for the sector in the decades to come.10th Nov, 2022 Starts at 04:00 PM (30 mins)Register Now
Our Speakers

Google Pixel replied to Cook’s tweet saying “Hmmmm Okay, I See You,” with the same hashtag, #TakeNote, that Cook used that has previously been used by the Utah Jazz NBA team on Twitter. Cook was previously called out by Utah Jazz owner Ryan Smith for using the team’s hashtag for Apple’s latest iPad and Apple TV announcements.

Google Pixel’s alluded to the Utah Jazz by telling NBA fans that “#TeamPixel is here to get you closer to your favorite team – tell us yours and we might be able to make your NBA Tip-Off even better.”

The iPhone tweet has since been deleted and tweeted out again, this time from the Twitter Web App.

This isn’t the first time an iPhone has been used to send out a competitor’s tweet.

Alicia Keys became creative director for BlackBerry in 2013, and said at the company’s launch event that she gave up her iPhone for a BlackBerry Z10. The singer was then caught tweeting from an iPhone, and posted another tweet saying she was hacked.

Apple Insider reported that Gadot’s tweet was deleted and subsequent promotional tweets for Huawei were posted by an Android. Gadot’s publicist told CNET that Gadot was a fan of her Huawei devices.