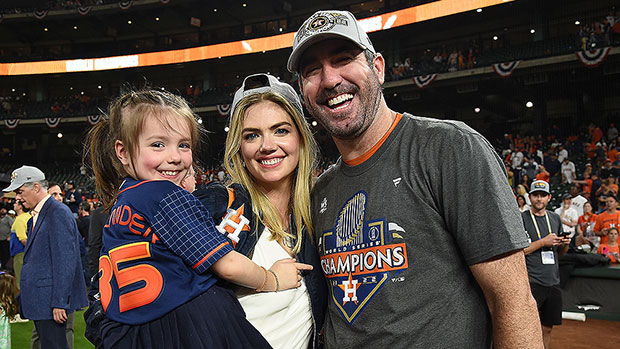 Kate Upton proved she is the ultimate proud partner as she was seen ecstatically celebrating her husband, Houston Astros’ star pitcher Justin Verlander’s, World Series win over the Philadelphia Phillies on Saturday, Nov. 5. The Sports illustrated Swimsuit Issue icon rocked an Astros baseball jersey, backwards baseball cap and a huge smile as she ran up to greet Justin after the victory. The adorable couple were joined by their even more adorable 5-year-old daughter Genevieve.

The young Astros fan had on her own jersey too, as Kate held her in her arms as the photogenic trio posed for some snaps on the Houston field following the team’s 4-1 win over the Phillies in Game 6 of the World Series, earning their first championship since the 2017 title.

Ahead of the biggest tournament in baseball, and shortly after the Astros won over the Yankees in the American League championship playoffs, Kate let it be known she would be cheering by Justin’s side barring any “family issues,” per a source who spoke EXCLUSIVELY with HollywoodLife. “This is a huge moment for Justin so barring any family issues Kate will be there at every game,” the insider shared. “She’s not just a supportive wife, she’s also become a massive baseball fan, she’s passionate about the game and knows her stuff so going to these World Series games and being there for Justin is a privilege, she loves it.”

Kate also seemed to be a bit clairvoyant when she posted a photo to Instagram on Oct. 27 of the Houston Astros celebrating their win over the Yankees, which sent them to the World Series. Alongside it, she wrote, “I am so proud of you @justinverlander… ASTROS ARE GOING TO THE WORLD SERIES!!! ❤️❤️❤️”

The cover girl and the athlete met in 2012 while working on a commercial for the Major League Baseball 2K12 video game. They soon began dating and after a short breakup, they were back together by 2014 with Justin proposing to Kate in 2016. A year later they walked down the aisle together and then welcomed Genevieve on November 7, 2018.