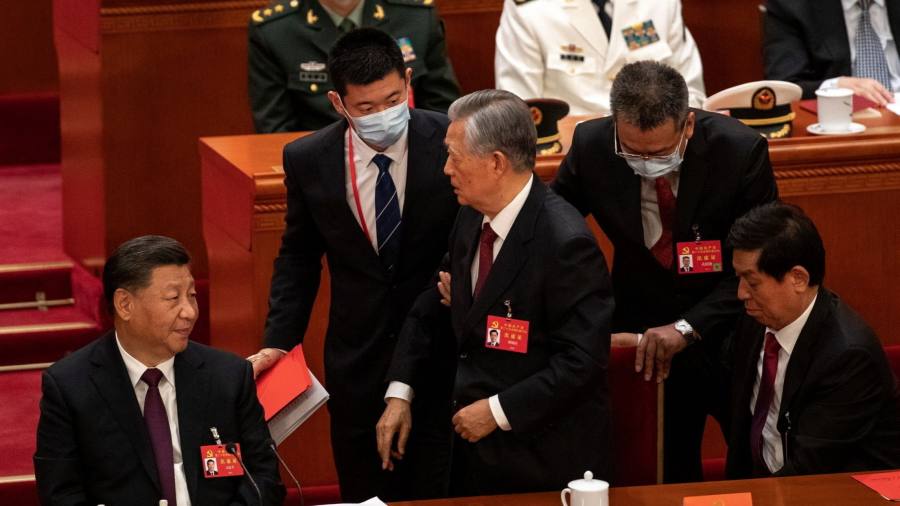 The dramatic exit of former president Hu Jintao from the closing session of the Chinese Communist party’s 20th congress at the weekend disrupted the carefully choreographed proceedings intended to celebrate Xi Jinping’s third term in power.

The official Xinhua news agency said in a tweet that Hu left because “he was not feeling well”. Video and photos appeared to show party officials first trying to pull — then cajoling — him out of his seat and off the stage.

Hu’s apparent reluctance to leave the platform provided fodder for observers who speculated that the 79-year-old, who served as party general secretary and state president for two five-year terms from 2002 to 2013 until Xi took over, was forced to leave.

As he was led away, Hu exchanged words with Xi and Premier Li Keqiang. He patted Li on the shoulder as if offering condolences and, shortly after the incident, it was confirmed that the premier would not be reappointed as a member of the Politburo Standing Committee, the party’s most powerful body.

Hu has often appeared frail at the few ceremonial events that he and China’s only other living ex-president, Jiang Zemin, have been trotted out for in recent years. Jiang, 96, did not attend last week’s congress.

Hu’s departure happened shortly after reporters were allowed into the hall for the formal conclusion of the congress and as it was confirmed that Xi was about to stack the politburo and Politburo Standing Committee with loyalists and yes-men.

Li’s party career ended prematurely. Under previous party convention shattered by Xi over the past week, Li, 67, would have been eligible to stay on the Politburo Standing Committee until 2027. Instead, his number two ranking in the party has been assumed by a controversial municipal party boss who once served as Xi’s secretary.

Adding to Li’s humiliation, Wang Huning, who is the same age as Li, retained his seat on the committee. As a result, says Chen Gang of the National University of Singapore, “the party’s formal age criteria has been broken”.

Willy Lam, a China politics expert at the Chinese University of Hong Kong, added that even if Hu’s exit was health related, the 90-second episode spoke volumes about old rifts at the top of the party that were settled decisively in Xi’s favour at the weekend.

“Hu Jintao will be very unhappy with the total dominance of the Politburo Standing Committee by Xi Jinping,” Lam said. “Everyone knows Hu Jintao wanted Li Keqiang to become general secretary [in 2012 rather than Xi].”

Hu’s critics dismiss him as a weak and ineffectual president who did nothing as party corruption soared on his watch. The “lost decade” he allegedly presided over is one of the arguments that Xi and his supporters trot out to justify him staying in power for an unprecedented third term, if not for life.

As Xi said in an almost two-hour speech at the congress’s opening session on October 16, which Hu sat through in its entirety, his administration had inherited and vanquished “serious latent dangers within the party, the state and the military”.

Hu normally sits quietly through such humiliations. But on Saturday, for whatever reason, he did not, and ended up overshadowing Xi.