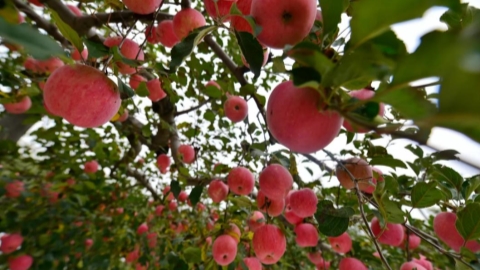 Villages in the city of Yan’an in northwest China’s Shaanxi Province are embracing the harvest season of apples.

Seeing the red, round fruit hanging from the trees, Zhao Yongdong, a 66-year-old farmer in Nangou Village, is delighted.

Having faith in the sweet fruit since it helped locals shake off poverty, Zhao is expecting a rise in profit this year, as the apple market has had a good year.

Yan’an was the base for the Communist Party of China during the 1930s-40s. The city on the Loess Plateau is now a major apple production base in China.

Data shows that more than 800,000 farmers in Yan’an have engaged in the industry, and income from this industry accounts for 27 percent of farmers’ per capita disposable income.

Thanks to the large-scale growing of apple and cherry trees as well as the development of tourism, Nangou Village shook off poverty in 2018, and the per capita income of villagers reached 17,500 yuan last year.

Zhang Xiuxiu’s life has also changed because of apples. The 33-year-old woman started her apple business in Luochuan County, Yan’an, six years ago. She used to pick, pack, and sell apples by herself at the beginning, but the introduction of e-commerce further boosted her business, and the sale can now be done on a mobile phone.

“Nowadays, we collect the fruit from trees in the morning, and they will be transported at noon and presented to our customers before night,” Zhang said.

The apple industry park in Luochuan covers more than 300 hectares, accommodating more than 350 enterprises and over 5,000 employees.

The annual output of apples in Yan’an reached 4 million tonnes, and the output value of the whole industrial chain reached 38.78 billion yuan last year. The Yan’an apples have entered some high-end fruit markets and are well-received in big cities such as Beijing, Shanghai, and Guangzhou.

Tian Caili is a worker responsible for selecting apples at a local company.

“The intelligent apple selecting line can precisely sort out products for our diverse customers,” said Tian. Tian added the advanced cold storage system allows apples to stay fresh for longer so that the fruits sell all year round. It also stabilizes the price of apples and ensures farmers’ income.

The country is advancing rural revitalization across the board and fostering local distinctive industries to create more channels for increasing farmers’ incomes.

“Apple has now become a new title of the old revolutionary base. And the fruit keeps bringing surprises for the Loess Plateau,” said Zhang Guanghong, an official of Gaoqiao Township in Yan’an.